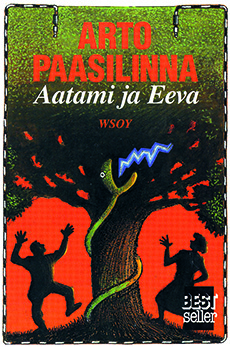 A biting satire about capitalism and saving the world from Finland’s greatest literary humorist!

Adam and Eve tells the story of Adam, a Finnish entrepreneur facing bankruptcy, who invents a gadget that he hopes will put an end to the energy crisis and make him rich.

But just as all hope seems to be lost, Eve—an enterprising and heavy-drinking lawyer—decides to make an investment. In both Adam and his invention.

And so begins a story of survival against the odds. Adam and Eve bring the business world to its knees and although Adam becomes rich, he doesn’t let his newfound success go to his head. He skilfully manages to balance business and pleasure. But is Adam’s invention really as good as he’s making it out to be?

“Bittersweet social criticism from Finland’s greatest literary humorist. Aschehoug has undoubtedly found their golden bird with the books of the incomparable Finnish author Arto Paasilinna… Adam and Eve is, first and foremost, a farce, with all of Paasilinna’s distinctive literary creativity inside”. – VG, Norway

“Adam and Eve is a fast-paced story with many twists and turns.” – Litteraturmagazinet, Norway

“A wonderfully entertaining book that contrasts human’s good nature with human’s shortcomings and uses facts to challenge prejudices about modern industrial society. One of the funniest books I have read.” – Litteraturmagazinet blog, Norway

“Adam and Eve is a frustrating, funny and inspiring tribute to our life on earth.” – ST, Sweden

“The story of the often tragic Rymättylä fascinates the reader and puts him under a spell. Will he get the Nobel Prize in Physics or will his inventions stay only in the sphere of visions and fantasies? Read and enjoy.” – Folkbladet, Sweden

“This is one of Paasilinna’s best novels.” – Värmlands Folkblad, Sweden

“This book made me laugh for hours! What a blast! Sometimes you do not know whether to laugh or to cry. Clearly one of Paasilinna’s funniest books, it’s just crazy all the way through.” – Marta, Boksidan, Sweden

“Lovable and weird. What makes Arto Paasilinna’s books so special is the irony that surrounds every sentence, the black humour that makes the reader cry with laughter, and of course the bizarre, openly tragicomic characters. Paasilinna proves again that he is a great writer. He uses virtually every cliché: the lawyer is money-hungry, the seven-time father pays no alimony, the oil magnates think only about profits… Paasilinna’s writing style is divinely funny, he puts tiny details at the forefront and this always turns into situational comedy.” – Buchwurm, Germany