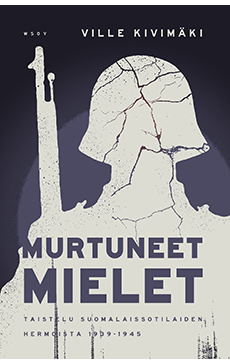 Broken Minds. Battling for the Nerves of Finnish Soldiers 1939-1945

Research on mental endurance and emotional breakdown of Finnish soldiers during the Second World War.

After the gunfire ceased, many veterans would be woken up by nightmares. What did they have to endure? How was it possible to maintain one’s mental health under circumstances where the limits of human endurance were met? What happened once this line was crossed?

The different stages of Finnish wars are well established, but the work on charting the emotional history of war is still ongoing. Broken Minds is a significant milestone in an important research area, resolutely deconstructing myths imposed upon bravery and national traumas that have afflicted several generations.

Ville Kivimäki examines the reasons behind mental endurance and emotional breakdown and their fluctuation through the different stages of the Second World War. Who were these soldiers, described as “cracked up” by their contemporaries? Why were they treated so differently in comparison to others wounded in the war?

The work also addresses military psychiatric practise prevalent at the time, as well as treatment options ranging from occupational therapy to electric shocks.

Broken Minds was awarded Finland’s most significant non-fiction literature prize, Non-fiction Finlandia Prize, in 2013, and it has sold close to 37 000 units in Finland to date.

Prize for the work

“[Broken Minds] deals with big subjects – human dignity and the extreme circumstances that a human being can end up to. It increases tolerance, and it’s a protest against the squeezing of people into one mould. The book stresses compassion and helps us to respect and empathize with each other. It deals with the meaning of peace, home and the nearest ones, as well as with the difficulty of helping. The reader of the book is forced to question his thoughts of the accepted and the repressed ones, of the strong and the weak. [—] Ville Kivimäki has verbalized the experiences of shell-shocked and mentally shaken soldiers [—] and succeeded in writing a book that speaks over the generation gaps.” – Statement of the Non-fiction Finlandia Prize jury

“Here’s a non-fiction book I’d like everyone to read. Even if your close circles don’t include a grandfather who re-lived the nightmares of war at night or a husband who became a mute, Broken Minds demonstrates how harshly they would’ve been treated in war.” – Aamulehti, Finland

“Reading this, everyone who hasn’t lived through war can think about everything they have been spared.” – Seura.fi, Finland

“Finland maintained its independence through the wars, and many historical accounts of war have been written. Those whose minds became disabled have been left aside (– –) Ville Kivimäki’s research brings a new perspective both to the history of war and the history of psychiatry (– –). The view on the shell-shocked becomes clearer. And so does the view on our wars.” – Helsingin Sanomat, Finland