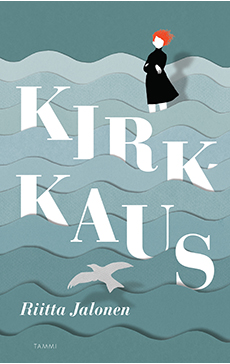 A powerful, sensory story about an author and the compulsion to write.

“My thoughts arrive in random order, they decide how they will emerge, and when. But it is my head that hums, my hand that writes.”

In Janet’s house, there’s a room where the dead are laid out to await burial. Janet’s two sisters have lain there, and her brother Geordie, who suffers from epilepsy and a love of the drink, may not be far behind.

Janet herself has flaming red hair and a head full of disturbing thoughts. But when a pen is placed in her hand and the paper is placed before her, everything changes: for a moment, the world is beautiful and comprehensible.

Riitta Jalonen’s novel is about the power of art, how art, language and words can save a person and bring them to life.

Tapping the experiences of New Zealand author Janet Frame, with whom she feels a deep affinity, Jalonen engages in intimate, barehanded grappling with the theme of being an artist and its agonies. She sketches freely and creatively, not stinting on colour, working up an engrossing portrait of a sensitive, unique individual whose psychological fragility was for years interpreted as mental infirmity – and who, once freed from the stamp of illness, rose to global prominence with her novels. Still sensitive and fragile, but building her life through her words, alive.

Shortlisted for the Runeberg Prize 2017

“Janet Frame (1924­­­­–2004) is an author from New Zealand whose autobiographical novels tell her story, in many ways a traumatic one, from which writing provides release. Riitta Jalonen has explored the fate of this writer in her twelfth novel in an impressive way, showing the true impact of pouring one’s soul into other people’s reality. Clarity is a historical novel about a person’s life, but above all, it is a novel about a person who writes, a Writer, whose workplace is always inside her head. Through her magnificent retrospective monologue, Riitta Jalonen tells this story in a way that will never leave the reader’s mind.” – Statement from the Runeberg Prize preliminary jury

“Getting under the skin of a distinctive and skilful author is an ambitious endeavour. Jalonen is not afraid of the challenge, telling the story of Frame’s life in the first person, putting words into the mouth of the modernistic virtuoso. In my view, this is not a Frame-styled pastiche transcending language barriers. Jalonen’s narrative voice is her own majestic creation, dropping magnificent metaphors and surprising observations one after another, completely naturally and without the slightest touch of awkwardness. In its unforcedness and clarity, the novel is true to its name. [–] The right of literature to exist is sometimes defended by the fact that reading helps enter the world of another person and thus makes us more empathetic. As I read Jalonen’s novel, I found myself almost believing that this could be true. Although one should be satisfied with aesthetic pleasure alone, the prize in this case would not be a minor feat. Clarity is the masterpiece of a wordsmith who has reached the peak of her career.” – Tuomas Juntunen, Parnasso literature magazine

“Riita Jalonen has really hit the mark with this one. Clarity shows the true place of literature among the arts (…) The writer’s workplace is in her head, and Jalonen takes the reader there through a skilful narrative that returns again and again to retrospective monologue. How do the mechanisms of memory work, how do Janet’s two worlds function parallel to one another and create overlapping mental images.” – Mervi Kantokorpi, Helsingin Sanomat newspaper

“Riitta Jalonen has published her principal work. It is impossible to come to any other conclusion when reading Clarity (…) intense and at the same time extremely sensitive (…) Clarity is pure enjoyment, an ode to individuality and beautiful language.” – Anuirmeli Sallamo-Lavi, Savon Sanomat newspaper

“A woman’s survival story becomes a strong, ethical stand on behalf of humanity. [–] The technical execution of joining moments and situations from different periods into a cohesive whole could hardly be more skilful. [–] The miraculously beautiful novel is stretched across Janet’s thoughts, which create the drama and focal points of the work. The style of the text is concrete, lifelike and visually depictive. The airy narration, tinted with various meanings, gets to the heart of the matter without exception. How do things feel? What is right? [–] the enchanting symbolism is constructed from mental landscapes of childhood, of the sea and birds [–]. The progression of the novel is carried along by strong thought, which creates its radiating energy.” – Maija Jelkänen, Hämeen Sanomat newspaper

“Jalonen’s text is majestic, beautiful and bright, the book perhaps her best, which is no small feat. The text has a calm, thoughtful rhythm, filled with feelings and strong, sometimes strange associations ­– the world is made up of terrible and beautiful things. Sometimes the narrative is simultaneously made up of prosaic commentary and shades of mysticism. The end result is pure beauty and brilliance.” ­– Leena Nygård, Keskipohjanmaa newspaper

“Clarity is not a light read, but once its magical world sucks you in, the story puts you in an almost hypnotic state.” – Rakkaudesta kirjoihin literary blog

“I am thankful to have been given the opportunity to read Janet’s story, which absolutely deserved to be captured in this book, and I can’t imagine anyone who could have done it better, more profoundly or more beautifully than Jalonen. Thank you, Riitta Jalonen!” – Kulttuuri kukoistaa literary blog

“Jalonen writes strongly and beautifully, in a say that crawls straight under my skin and into my soul. [—] Clarity is undoubtedly one of the best books of the year.” ­– Lukutoukan kulttuuriblogi literary blog

“I have just read perhaps the best book of the year.” – Järjellä ja tunteella literary blog

“Clarity is fascinating because of the turbulent flow of language and narrative. If clarity is easily understood as ease of understanding, the expressive style of the novel is not really such, but it is also not dim or murky; rather a beautiful description of uncovering the most internal. It is there that the possibilities of life begin to dawn – with clarity.” ­– Tuijata literary blog

“I have just read one of the best books of the year. That’s no exaggeration. [—] I don’t remember the last time I read such beautiful and delicate prose, or the last time a writer has got so skilfully into the head of her protagonist, as in this novel. [—] The strengths of the novel thus lie not only in the story [—] but also and especially in the language and the narrative, which are as if from another world. I don’t know if I’ve ever read something comparable, something as impressive.” ­– Lukuisa literary blog