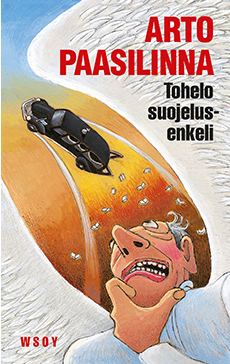 A soaring and heart-warming fantasy about a trainee guardian angel with a seemingly impossible task.

Sulo Auvinen has just finished a Heavenly Protection course at the Invisible Community of Angels’ Headquarters. In his life on earth, Auvinen was utterly hopeless. That’s why his first assignment in heaven is pretty easy: he must watch over Aaro Korhonen, a fourty-something man who has too much time and money on his hands. Auvinen is eager to get on with the job and he dives straight into it!

All of a sudden, Korhonen‘s life takes a turn and he finds himself confronted with seemingly endless misfortune. To top it all off, he ends up having affairs with two women… at the same time! And it’s not long before the Devil himself intervenes.

The fledgling guardian angel does his best to help Auvinen, but spreading his wings turns out to be harder than he ever expected. And the Devil certainly isn’t making things any easier.

“This book contains so much classic Paasilinna: warm and empathic portrayals of people; dark humour; slapstick jokes; and mentions of heaven and hell.” – Bergens Tidene, Norway

“Perfectly wonderful! The road to hell is paved with good intentions.” – Litteraturmagasinet, Sweden

“You will die of laughter.” – DG, Sweden