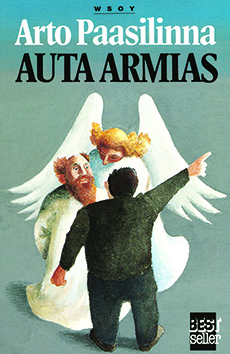 An earthy and humorous tale with echoes of Giovanni Guareschi’s Father Camillo series.

Birger Ryynänen is a crane driver in Helsinki. He’s just come out the other side of a failed marriage and a painful divorce—something his child support payments won’t let him forget. Ryynänen has often pondered life’s deeper questions. He’s certainly not religious, but he does have a tendency to chat to God as he spends time working at the top of a crane. But don’t worry, he’s critical when he needs to be!

What Ryynänen doesn’t know is that God is stressed out and in need of a sabbatical. In fact, God has asked Saint Peter and the Archangel Gabriel to find a suitable stand-in. Enter… Ryynänen! When Saint Peter flutters down from Heaven and lands on the top of his crane, Ryynänen can’t quite believe it. And when Saint Peter makes an unbelievable proposal, Ryynänen is forced to step up to the challenge.