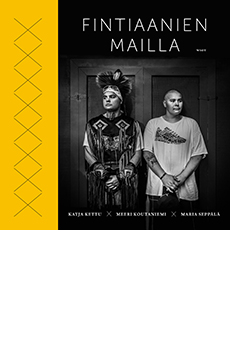 In the Land of the Finndians

Join the descendants of Finnish immigrants and North American natives on a bittersweet journey through the mines, casinos, and reservations of the Finndians

At the turn of the 20th century, tens of thousands of emigrants left Finland seeking a better life in North America. Scraping together a living in Finland had been hard, but they didn’t find bliss in their new homeland either. Much like today, immigrants struggled against prejudices held by the majority. But there was work to be found in the mines and the forests, where the Finns gradually forged bonds with the members of the hard-pressed Ojibwe tribe.

The two groups shared a close relationship with nature and a similar worldview. They coexisted so closely that their joint descendants came to be known as “Finndians”. The gorgeously illustrated In the Land of the Finndians, a perfect amalgamation of fact and fiction, opens up a poignant vista into the lives of these forgotten people.

In the Land of the Finndians marks a unique collaboration between Katja Kettu, a best-selling author; Meeri Koutaniemi, a top photographer; and Maria Seppälä, a seasoned documentary filmmaker. A documentary film about the project aired on Yle in 2019.

Read more about the project from Yle: The Story of Finns’ Distant Cousins

Maria Seppälä (b.1976) is a culture journalist and a documentary film director whose career frequently takes her abroad to investigate social problems and issues surrounding refugees.

Meeri Koutaniemi (b.1987) is a photographer whose pictures have captured women and minorities in over thirty countries across the world. Koutaniemi has won numerous prestigious awards, including the Daily Press series at the Visa pour L’Image festival in France.

“This book about the descendants of the Finns and North American Indians brings a little-known but interesting topic to the attention of the general public… The authors have put a great deal of effort into gathering information: the method of presentation is inventive and multifaceted, and the whole package is enhanced with fantastic images. The stories of people are impressive, and the emotion-filled interviews let their voices come through. The strong message of the book is the fundamental irrationality of racism and xenophobia.” – Statement of the Jury, Kanava Non-Fiction Prize

“In The Land of the Finndians is not a traditional travel book, it is a cultural act.” – Statement of the Jury, Mondo Best Travel Book of the Year Prize

“In the Land of the Finndians is the first book to tell the story of these people, the descendants of the Finns and the [North American] indigenous people. For this reason, Katja Kettu, Meeri Koutaniemi, Maria Seppälä’s work can rightly be called an act of culture.” – Aamulehti newspaper

“In the Land of the Finndians is a successful work of non-fiction. It is history made into narrative, told through the stories of people’s lives, impressive photographs and sometimes even fictional tales.” – Voima newspaper

“Kettu’s stories, Seppälä’s accounts of the lives of indigenous people today, and Koutaniemi’s pictures tell human stories that shed light on a situation of marginalisation and societal pressures to change. A diverse collection of stories that tell of the past but live in the world of today.” – Tiina Eloranta, Sydän.fi

“The book is a clearly written, beautiful non-fiction work that is also easy to read. Thanks to the huge number of stories about people, the subject does not read as a dry lecture, but rather comes to life. The work also includes some stories that Katja Kettu was inspired to write on the subject, describing the mentality and traditions of the people through fiction. Otherwise, the work consists of facts and personal stories told in a coherent, interesting and reader-friendly way, with an appropriate amount of commentary, as can be expected from a professional writer and editor. Photographer Meeri Koutaniemi has illustrated the book with wonderfully varied and narrative images, and the work also includes a few historical photographs. This book is easy to browse through and to sink into, and would make a lovely addition to any bookshelf.” – Kulttuuri kukoistaa blog

“The book describes the lives of the Finndians and North American indigenous people today in an honest and unembellished way – exactly how both Finns and Ojibwa would want…. Koutaniemi is a fantastic photographer. Without her images, the book would not be nearly as splendid as it is now. The book looks lovely, although its content is, of course, most important. The trio have such a heavy subject matter at hand that I’m betting their book will win the Non-Fiction Finlandia Prize.” – Mustetta ja paperia blog

“The story of the Finndians feels very topical right now, as immigration has been such an important topic of conversation throughout Europe lately. Few of us remember that between 1860 and 1944, nearly 400,000 people left Finland to settle in North America – and they did not receive the warmest welcome… The Finns wound up working in the forests, in the same areas that were home to indigenous people. Thus began the story of the Finndians… Katja Kettu’s works have been published in nearly 20 different languages. It seems that the world is her home. This might be partly due to the fact that, although her stories take place in small places, the topics are global. “ – Soome instituut, Estonia

“The book is not only about Finndians, it’s about indigenous people, and how they are affected in the same ways, even in different countries. It mixes current issues with history, to try to make people understand that immigration is not a new thing, even as people across the world worry about waves of immigrants from war-torn countries such as Syria, Afghanistan and Iraq.” – Pine Journal, Minnesota, USA