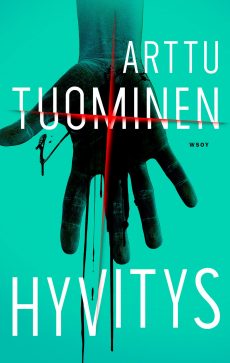 In the gripping second instalment by the award-winning writer of The Oath, a vulnerable secret threatens to unhinge everything.

The Oath, winner of the 2020 ‘Johtolanka’ Prize for Crime Novel of the Year propelled Arttu Tuominen’s new crime series to heady heights. Jeopardy, the second book in the series, raises the bar even higher.

When Police Commissioner Henrik ‘the Ox’ Oksman is called to investigate an explosion at a club in the town centre, he has no idea that the case he has been assigned runs the risk of exposing his deepest secret.

The incident claims several lives and prompts an outpouring of public sympathy. Meanwhile, information about the tragedy spreads like wildfire and, inevitably, discussion forums run rampant with speculation about the perpetrator, or self-styled “emissary”, who threatens to wreak further violence in a video message.

Jari Paloviita joins Oksman in investigating the case, but will the internal conflicts of Pori’s police unit jeopardise everything before they can prevent another attack?

Set near the Baltic cost of western Finland, Jeopardy is a novel about the threat and fear of violence, of inconvenient secrets, and self-acceptance.

Arttu Tuominen (b. 1981) is a Finnish environmental inspector moonlighting as a crime writer. Tuominen was awarded the ‘Johtolanka’ Prize for The Oath, garnering praise for the novel’s cleverly constructed flashbacks and realistic dialogue, making him eligible for the Glass Key Prize. Tuominen’s writing is distinctive for giving a compassionate and relatable voice to those on both sides of the law. He lives in the south-western Finnish town of Pori with his family.

“Arttu Tuominen is undoubtedly the star of Finnish crime fiction… Tuominen confidently describes today’s toxic society and examines where it could take us… This book is frighteningly topical; a contemporary novel at its very best. Arttu Tuominen is also a great character writer. Oksman, who is deeply affected by his childhood traumas, is just as credible as The Oath’s Paloviita, who was forced to take a stand on a stabbing carried out by his childhood friend… Jeopardy joins a growing number of Nordic detective stories in which the murders are brutal, every action has a background story, and an astute comment on societal development lies behind everything. Arttu Tuominen is a stand out talent.” — Kai Hirvasnoro, Kansan Uutiset newspaper

“Reading JEOPARDY is like experiencing a bracingly fresh Northern wind… Tuominen’s JEOARDY is a no-frills story about fathers and sons…. Even as an adult [Oksman]—who is strong enough to carry two grown men on his shoulders—shrinks into a little boy under his violent father’s gaze. In his writing, Tuominen emphasises the right of the individual to live freely according to his sexual orientation. His argument is moderate, inviting the reader to reflect on his or her own attitudes towards faith and the various aspects of humanity. Oksman’s decision about whether he should throw away his dress or commit suicide, cannot but evoke compassion from the reader. The novel’s Pori-humour provides respite from its difficult subject matter.” — Heidi Lakkala, Lapin Kansa newspaper

“A grenade attack on a nightclub favoured by sexual minorities in the centre of Pori. Five dead, dozens injured. The police suspect it’s a terror attack. So begins Arttu Tuominen’s… new novel Jeopardy… The latest novel by Arttu Tuominen, this year’s winner of the ‘Johtolanka’ Prize for Crime Novel of the Year, once again does the job: it’s entertaining and takes readers along for the ride.” — Satakunnan Kansa newspaper

“Pori-based author Arttu Tuominen… has quickly become an important writer on the crime fiction scene… If the main theme of The Oath was friendship, the main theme of Jeopardy is self-acceptance. In the spirit of Henning Mankell, Tuominen’s writing presents a clear message on tolerance.” — Pekka Jäntti, Etelä-Suomen Sanomat newspaper

“Arttu Tuominen, the author of last year’s crime fiction book of the summer, has shot right to the top of Finland’s crime fiction scene. Tuominen is a master of building psychological excitement and characters with many layers… The world of the book is masculine, but thanks to its rich psychological profile it doesn’t matter: its characters are multidimensional. The book also contains a hint of romance. I am eagerly awaiting Tuominen’s next book because I want to know how Paloviita’s marriage is going and how Oksman will get his life in order.” — Jukka Väänänen, Apu magazine

“In Arttu Tuominen’s Jeopardy, society is slipping into a state of chaos which is fuelled by extremism. The book’s central theme is a conscious statement about the negative developments about society… Jeopardy is fictional and entertaining, but its roots are set firmly within today’s world and it comments on Finnish, as well as European, society.” — Katriina Lundelin, Seura magazine

“Tuominen’s use of language is agile and fluent and the book’s narrative drives the plot through surprising twists and turns in a distressing world that’s filled with brutal violence… Psychology is obviously close to the author’s heart. No trauma or oppression goes unexplained by the author. While the book demonstrates that evil and violence between different groups exists on a societal level, it also illustrates how it can also be found on a personal level within families. The end of Jeopardy is explosive and distressing but, at the very last minute, Tuominen suggests that there is still justice and good to be found in the world.” — Jussi Wahlgren, Metsa.net

“…eloquent and thought-provoking. Tuominen continues his formidable work with every book. I have always been a fan of his unbelievably good, descriptive writing and his use of metaphors… I also admire his bold choice of challenging themes and the way he handles them fairly, giving a voice to different perspectives.” — Jonnan lukunurkkaus literary blog