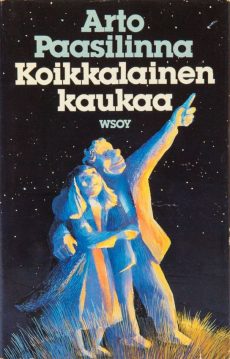 A surreal and unpredictable eco-novel about a space ship that no one notices because everyone’s too busy watching television.

A space ship lands in Salla Naruska’s garden. The local dogs are all barking, but somehow eco-farmer Taisto Hallikainen is the only person who sees it land, because everyone else is too busy watching TV.

Upon further investigation into the contents of the space ship, Hallikainen encounters a lonely human-like creature. He befriends the creature and names it Kokkilainen. The creature tells Hallikainen that he’s been sent to earth to collect commodities, animals and plants in order to take them back to his home planet. Hallikainen agrees to help and takes Kokkilainen to Helsinki.

Will the duo find what they’re looking for?