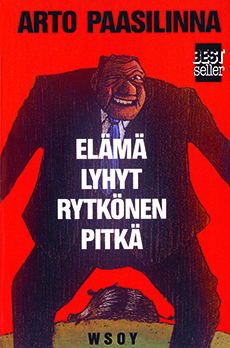 A glorious and profound summer road trip novel about memory loss that travels across Finland.

Land surveyor Taavetti Rytkönen remembers the good, old days as though they were yesterday. The problem is, he can’t remember yesterday. Rytkönen sets off on a journey to discover his past. If only his taxi driver had known who he was picking up!

Life Short, Rytkönen Tall is filled with mysterious, quirky and down-right fascinating characters. It’s a novel that takes readers on a summer road trip, setting off from Helsinki and driving through the most beautiful Finnish scenery as it makes its way up north.

Life Short, Rytkönen Tall affirms Arto Paasilinna’s status as one of the greatest contemporary northern European authors of our time.

Life Short, Rytkönen Tall was adapted for film in Finland in 1996. It was directed by Ere Kokkonen.

“At his best, Paasilinna brings humour and sincerity to the same scenes. This is what happens when Rytkönen confronts his memories in Parola’s Armour Museum.” – Helsingin Sanomat newspaper