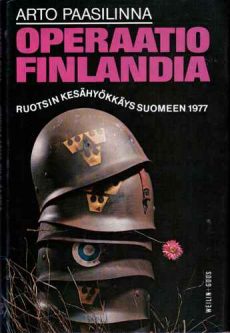 The far right has taken over Sweden and the Åland islands have expressed a desire to leave Finland. Diplomatic relations are at an all-time low, a sense of unrest starts to build and in the summer of 1977 the unthinkable happens: a Swedish fighter squadron strikes Naantali and a war breaks out.

Sweden ascends on the Åland islands, Turku, and Vaasa. Haaparanta is captured and Finnish troops make their way into northern Sweden. The Finnish government hide out in a bomb shelter underneath the Great Church, women from Turku entertain Swedish officers, and a couple of military soldiers take over an entire village in eastern Finland.

Arto Paasilinna dedicated Operation Finlandia to the then King of Sweden, Crown Prince Carl Gustav, promising to write an alternate ending if the book were ever translated into Swedish.

“The course of the war is carefully thought out and described. At its time of writing, it was still a possible description of the future but now, in retrospect, it’s mainly an alternate history. In style, this book is different to Paasilinna’s later works. I sometimes consider this the very best of his works, but in any case it’s certainly at the top of the list.” – Kirjavinkit blog