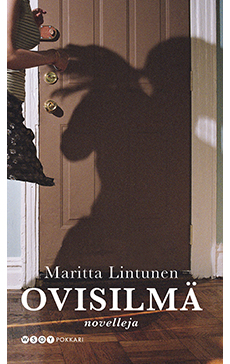 A perceptive short-story writer reveals where the hurt lies.

Terror experienced by a pensioner begins a grotesquely realistic week of suffering. The peephole captures the neighbour, peeping becomes an obsession. A successful player is forced to run the gauntlet through painful memories. A pair of struggling small brothers, the absent mother’s men of the house…

The characters in Maritta Lintunen’s short stories will not give up. They struggle, act brave and continue to run the gauntlet. A perceptive short-story writer recognises where hurt lies: childhood traumas, real and imagined threats and fears, human loneliness. Dramatic juxtapositions are constructed into provoking short stories, where warm humour and perceptive irony work as counterpoints to each other. This collection is a brilliant new departure from the author.

The short story Passiontide (Piinaviikko) was published in English to a huge critical acclaim in the Best European Fiction Anthology (Dalkey Archive Press, 2012). Passiontide has also been publishd in Swedish (in an Anthology entitled Rådjurens himmel; Tranan, 2012) and in Hungarian (Magyar Lettre Internationale, 2014); and the short story The Message Bearer (Viestintuoja) has appeared in English in the Words Without Borders online journal.

“These short stories expand into a research about the multiple ways in which a human being can be abandoned of broken down, and how relentlessly a human being holds on to the hope of a better tomorrow.” – Statement of the Jury, Runeberg Prize

“Maritta Lintunen cuts open the souls of people like the pathologist’s knife cuts the body. She writes mercilessly about oppression, selfishness and co-dependency – exposing the bitter evil which is in you, in me, in us all. The skilful short stories of Peephole center around the use of power, sexuality, feeling of death, and almost masochistic submission. They question: when and why does proximity suffocate us, and from which border do the responsibilities begin?” – Helsingin Sanomat

“Lintunen writes about subordination, oppression, weakness and strength. She shows the reader the counterparts of the reader’s internal motives, and the evil that is in all of us. ” – Pohjalainen

“Well, may I say, this is a real treat. A first person narrative that tells the story of a woman and what she experiences after she regains consciousness from a terrible domestic accident. Not only first person, she is the only character to speak of. And how Lintunen holds a beautiful grip over us throughout. (…) This is a delight, which I will certainly return to.” – ThreeSixFiveStory on Passiontide

“Maritta Lintunen’s Passiontide, a masterful story which reminds us that perhaps the most baffling and scary events occuring in the world, still happen in the realm of our own fallible minds and bodies.” – The Short Review on Passiontide

“Passiontide by Maritta Lintunen is a story I enjoyed reading, because it was written without any complexities, no confusions with respect to time or characters and it deals with family.” – Tabadul, Lebanon

“One of the best in this volume of short stories, believe you me.” – Biblioteca do Fabio, Brazil, on Passiontide