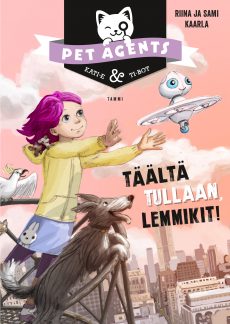 A new series for animal lovers!

Kati-e used to help out with her friends’ and neighbours’ pets, but when more people started asking for help, she decided to build herself a flying assistant. That’s how Pet Agents was formed!

As well as pet problems, the duo solve tricky questions about wild animals. Their headquarters are on a former water tower’s roof, which has just enough room for all of Kati-e’s pets and computers. As well as Kati-e and Ti-bot, there’s an Abyssinian cat called Mir, a dog called Moppy, a sulphur-crested cockatoo called Bean, and two rats called Bit and Mode.

In New Pets and New Friends! Kati-e and Ti-bot have a few different cases to solve: they must help a family choose the right breed of puppy to fit their lifestyle and they need to figure out why the new neighbourhood puppy is sick. And then Ti-bot has to transform into a squirrel to deal with an emergency situation. They even make friends with Tim, the boy next door, and help him set up an aquarium.

Riina and Sami Kaarla write and illustrate the Pet Agents series. As well as their four sons, their family includes two dogs and lots of cats. They have no shortage of pet adventures of their own!

“New Pets and New Friends! is a fun and colourful book that teaches children how to treat animals properly.” – Kirjasähkökäyrä blog

“Children’s books about animals often train their readers to treat animals with respect. In the Pet Agents series, children interested in pets and other domestic animals also learn about their care and behaviour. The strength of the Pet Agents series lies in (…) its event-rich storytelling and abundant, colourful illustrations. (…) The children in the series are active, energetic and have a wide network of friends.” – Lastenkirjahylly blog

“It’s a pleasure to follow the wonderful illustrations in these books. Their colour scheme is lovely and fresh. I like these children’s books very much anyway. They are high-quality, feel-good books.” – Neverendingly blog

“There’s something for everyone in the Pet Agents book series, but the framework is so well-refined that it stays cohesive and interesting. (…) The book series has such an international feel that I had to check a couple of times that Pet Agents really is the work of two authors from here in Finland.” – Lähiömutsi blog

“One of the best new children’s books that I have come across.” — Yöpöydän kirjat blog