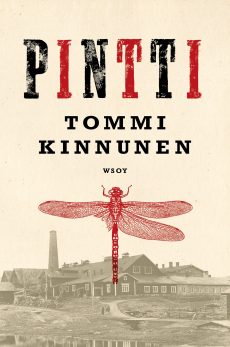 A rich and refreshing portrayal of the lives and fortunes of glass factory workers picking up the pieces after the war by bestselling author Tommi Kinnunen, Finland’s answer to John Steinbeck.

The Tyynelä family have grown up in the shadows of the glassworks. Jussi, the eldest of three, is moved from post to post in different menial jobs at the factory, while the others work their way up in the ranks. But he sees the world around him differently, its detail and sharpness more acutely than those around him.

Jussi’s sisters are consumed by their own lives and worries. Helmi works at the factory and is filled with nostalgia for the past. Irascible Raili remembers her former life in Helsinki, holding onto the belief that to get ahead in life, one must simply have the will to do so. But the war has changed everything.

With his unmistakable style and lyrical prose, in this three-day-novel Tommi Kinnunen portrays the microcosm of the glassworks, the destinies of its people, and the shape of their emotions and relationships with one another in the aftermath of the war. A beautifully-drawn portrayal of the men and women that history books forgot.

Tommi Kinnunen (b. 1973) was born in north-eastern Finland. He currently lives with his family in Turku and works as a Finnish language and literature lecturer. His debut novel Where Four Roads Meet  was a stunning critical and sales success, with translation rights sold to 14 countries within its first year. His second novel The Light Behind the Eyes was shortlisted for the Finlandia Fiction Prize in 2016 and immediately topped Finland’s bestseller lists. The Glass River, his much-anticipated third novel, sold 20,000 copies within a week of publication.

2019, winner of the Bothnia Prize
2019, nominated for the Young Aleksis Prize

“Kinnunen shows himself to be the best we have when it comes to portraying human suffering and prejudicial injustice.” – Helsingin Sanomat newspaper

“Like Dostoevsky’s Idiot, Jussi is shunned by the community for his defiency.” – Lapin Kansa newspaper

“Doesn’t disappoint even those with the highest of expectations.” – Karjalainen newspaper

“Reminiscent of the village of Maconda in One Hundred Years of Solitude by Gabriel García Márquez.” – Oma aika newspaper

“The Glass River is a bit lighter than Kinnunen’s previous two novels, which went deeper into the human experience and gave a broad social history, whereas this novel gives an impression of the time, place, and people – like a black and white picture that opens and closes as you go through an old photo album. But it’s an image more than sharp enough to leave impressions on those who have seen it and read it.” – Janneken Øverland, Klassekampen, Norway

“A moving story about a family, a story about glass blowing and a story about the post-war era in a small Finnish village… Tommi Kinnunen is an author that should be read by many. Highly recommended.” – Med bog ogh palette blog, Norway