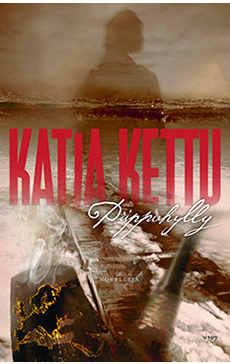 By the lone shores of the Arctic Ocean, a man’s sole companion is his imagination

From a certain vantage point in the North you can look down and tell the tales of the entire world.

The Dead Man’s fjord is a land of demon dogs, creepy rock fields, sea fires, and churning clouds. War is drawing close, and ahead of it looms fear. By the lone shores of the Arctic Ocean, man’s sole companion is his imagination: tales carried forward by the currants of the sea.

The Dead Man collects pipes that have washed ashore. He gathers them on the stony beach and arranges them on his shelf. A collection is born, bringing tales from the far corners of the world together. The pipes have travelled from the favelas of Brazil, the voodoo villages of the African west coast, and the meandering waters of the Russian River Volga. They have reached the end of their journeys from the Near East and 1930s Berlin. They speak of a man who rules the waves and of a woman who lies waiting for her beloved, burrowed deep into the sand.

Many of the characters in The Pipe Collector appeared in Katja Kettu’s award-winning novel The Midwife, wheread others are new.

The White Lily of Stalingrad (Pipe Number 11) was turned into a radio play in Finland.

“Katja Kettu has established herself as part of the enduring family of original and innovative storytellers. Her novel The Midwife has already shown this to be true, and The Pipe Collector, only reinforces that fact. Kettu belongs to the cream of the crop when it comes storytellers. She is the Karen Blixen of the far North.” – MTV3.fi

“It is impossible to put down this book; it has to be read all over again, immediately.” – Turun Ylioppilaslehti newspaper

“The stories in this book tell the tales of the owners of the pipes. Several of them feature individuals already familiar to readers of The Midwife, and some of the characters are well-known historical figures. The tales span the period from the early 20th century to the war years, covering a geographically comprehensive area. By transferring her characters from one short story to another, Kettu skilfully links her stories.” – Turun Sanomat newspaper

“Words pulsate through these pages like uncontrollable creatures of the polar sea. The narrative reflects an animal strength… The pipes are a proof of the similarity of people, their longing for love and the ways in which it manifests itself.” – Savon Sanomat newspaper

“Each story is the tale that Pietari Kutila, the father in The Midwife, tells his daughter: the tale of the previous owner of the pipe. The treasures of his pipe collection weave his stories into an elaborate web, intertwining elements of fantasy and truth into an amazingly shattered yet single whole – the mosaic of life with all its realities. Kettu transports her readers back to the secrets of the Dead Man’s fjord while simultaneously whisking them across different worlds.” – Turun Ylioppilaslehti newspaper

“The language is brash and bold, the sentences masterful, and the human destinies pummel you in the face with such intensity that the soul shudders.” – Kotivinkki magazine

“The astounding Kätilö [The Midwife] made Katja Kettu a household name. The same vivid, carnal language lives on in Kettu’s latest short story collection, The Pipe Collector… the pipes on the collector’s shelf tell painful, intense, touching and tender stories that carry the reader off to all corners of the world.”  – Maaseudun Tulevaisuus newspaper

“The best thing is Kettu’s lush and original language, a sensuous experience in and of itself.” – Et-lehti magazine