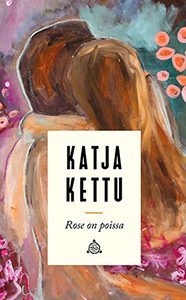 A wild and lyrical story about love, unfulfilled dreams and finding your roots.

Ettu wakes up at his home on a Minnesota reservation one day to find his beloved Rose is gone. At the police station, it turns out that Rose is not the only thing he’s missing; he’s lost the past 35 years that she has been missing from his side.

The story of Rose’s disappearance and Ettu’s decline is narrated by their adult daughter Lempi. Half-Ojibwa, half-Finn, Lempi struggles with the inevitable conflict of her own identity – too white on the reservation and too Indian away from it. Lempi pieces together the fragments of the kaleidoscopic canvas of her life: childhood recollections of her mother’s presence; the bitter, episodic stings of adolescence; nostalgia and the distant roots in the distant homeland of her Finnish grandparents. Gradually, she comes to understand how memory sustains our identity, experiences, and worldview – as well as the healing power of oblivion.

With echoes of Karen Blixen and Gabriel García Marquez, Katja Kettu’s fifth novel, Rose is Gone is a sweeping narrative suffused with a reality-transcending hope: a love story that sparks into flame, telling a tale rich in its prose under the thrall of the unfettered imagination, of a reality that is more hopeful than those of many others’ in today’s world.

“Like Stephen King’s Rose Madder, Kettu writes about the growing rage of the subjugated woman… in captivating language that enchants and seduces.”– Kaleva newspaper

“Katja Kettu’s Rose is Gone is everything but an average book; it’s a visionary novel with a long life ahead of it, well beyond just this season.” – Helsingin Sanomat newspaper

“If you read just one Finnish novel this year, read Rose is Gone, Katja Kettu’s magnificent Twin Peaks-like mystery. Mysterious language and an intense, passionate story absorb the reader into a magic thrall, causing them to fall under its spell entirely after just tens of pages… Exceptionally brilliant.” – Aamulehti newspaper

“A beautiful, heavy and at once demanding yet enjoyable book. Forming its basis, Kettu’s personal links to both Finnish immigrants as well as Native Americans bring everything together with effortless fluidity, though scenes depicting relations between the first nation and the powers that be make for difficult reading. Most beautiful is the language in Kettu’s writing. Expressions and their rhythms, together with the portrayal of the characters and landscapes, demand the reader’s attention, whilst drawing you in to the story and offering up both challenge and pleasure. Definitely one of the year’s top books, if not the best!” – Hämeen Sanomat newspaper

“A full-blooded story of love and violence.” – Turun Sanomat newspaper

“The rhythm of the unusual Finnish language and the metaphorical weaving of emotion, nature and humanity becomes understandable through the necessity of introducing the imagery, vocabulary and history of indigenous cultures in all their abundance in the pages of this book. At moments throughout, the stagnation and oppressiveness yet beautifully mystical and dreamlike realities of the reservation hits you.” – Keskisuomalainen newspaper

“The novel portrays the historical oppression of Native Americans and subjugation of women with the underlying idea that only by revealing the truth can individual repair their broken identity.” – Savon Sanomat newspaper

“If you only read one Finnish book this year, Rose is Gone is an excellent choice.” –  Satakunnan Kansa newspaper

“Lempi writes letters to her teenage love, in which she ponders why her Ojibwe mother, Rose, abandoned her and her Finnish father, Ettu. Lempi then discovers letters from her mother, telling her of Rose and Ettu’s tempestuous love story, which is woven into myth and carried by Kettu’s richly-melodious and enchanting language.” – Statement of the Finlandia Prize Jury

“Kettu’s unique, poetic language… is extremely expressive and provokes a physical reaction from its reader. It’s spell-binding: it flows like ice-cold spring water and sizzles like water thrown onto the hot stones of a sauna.” – Sirp, Estonia

“Rose is Gone is a beautifully written story of injustice, love and finding oneself between two identities… Rose is Gone is a colourful story…. This book is filled with the expressive and lively language that is characteristic of Katja Kettu, but this book is more poetic and beautiful than ever.” – Postimees, Estonia

“Kaija Kettu is a master of love stories.” – Raamatukogu, Estonia

“Kettu writes sensuously, in lush, and boldly playful language that is a pleasure to read.” – Kirjaluotsi blog

“This work has been written by someone with the power of words, some sort of magic power to rotate both words and phrases and story… Rose is Gone touched my soul, but did not stay there – because it pierced my heart.” – Lumiomena blog

“A story that lingers for a long time after reading, but softly so.” – Kirjavinkit blog

“Kettu is searingly skilled. Again, her use of language, creation of atmosphere, and wealth of knowledge and historical context are admirable.” – Kulttuuri kukoistaa blog

“Love, anger, fear, and sadness intertwine to play on the emotions, that won’t leave you unmoved… it reconfirms that Kettu is a skilled wordsmith.” – Kirjakaapin kummitus blog

“Rose is Gone is a great novel – strong and sad, yet quiet and wild all at once.” – Kirjan pauloissa blog

“This is a gentler Kettu, but still fully recognisable in terms of the language and theme.” – Lukuisa blog