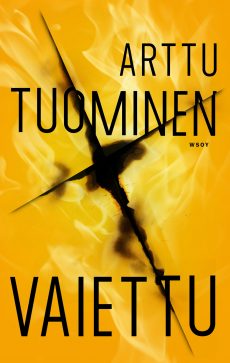 In this dazzling third instalment by the Glass Key nominated writer, a web of violent crimes exposes a darker truth.

The Oath, winner of the 2020 Johtolanka Prize for Crime Novel of the Year, propelled Arttu Tuominen’s crime series to heady heights and earned him a nomination for the prestigious 2021 Glass Key Award. Jeopardy followed, raising the bar even higher and now comes Silenced, the astonishing third, standalone book in the River Delta series with plot echoes of Henning Mankell’s Return of the Dancing Master by a rising star being hailed as Finland’s answer to Ragnar Jónasson.

When Albert Kangasniemi, a 98-year-old war veteran, is the victim of an especially violent attack, Pori’s police unit are called to investigate. Police Commissioner Jari Paloviita, along with his colleagues Henrik ‘the Ox’ Oksman and Linda Toivonen, suspect that the crime may belong to a web of incomprehensibly cruel attacks on the defenceless elderly.

Their investigation takes a dramatic turn when they find an old Waffen-SS uniform in one of the victim’s apartments. In carefully constructed flashbacks, Tuominen examines how the choices we make can affect the rest of our lives, exploring the brutality of those who joined Waffen-SS during the 1941 Ceasefire. In the end it is up to Jari and his colleagues to decide whether there are some things that cannot be forgiven.

Arttu Tuominen (b. 1981) is a Finnish environmental inspector moonlighting as a crime writer. Tuominen was awarded the Johtolanka Prize for The Oath, garnering praise for the novel’s cleverly constructed flashbacks and realistic dialogue, making him eligible for the Glass Key Award. Tuominen’s writing is distinctive for giving a compassionate and relatable voice to those on both sides of the law. He lives in the south-western Finnish town of Pori with his family.

“The category winner is an audiobook with a theme that is horrifyingly topical: where does human evil come from? Can the perpetrators of atrocities ever reconcile their actions? What is the responsibility of nations and the machinations of violence they perpetuate when their members kill and torture the weak and defenseless?
The winning title skillfully combines history and the present. The backdrop is carefully rendered. It is chilling that, eighty years later, crimes against humanity are once again happening at the scene of the story. The milieux are skillfully described, both 1040s Ukraine as well as 2020s Pori.” — Storytel awards, best audio book of the year (crime & thriller) – the jury statement

“SILENCED is the third book in Tuominen’s River Delta series and it’s the best so far… Tuominen’s superpower is maintaining a sense of calm and neutrality when it comes to even the most controversial topics. He tackles topical events and discussion points without compromising on the detective story at hand. At the same time, he empathetically describes the private lives of the police officers and their relationships to their work… The end of SILENCED is undoubtedly harsh, but in its own way it’s also chillingly elegant. Tuominen has bought a certain peculiarity to Nordic detective stories, making him an international relevant crime fiction author.” — Pertti Avola, Helsingin Sanomat newspaper

“Finland’s most talented crime fiction author again transcends genres in his latest book. The result is completely unique… Arttu Tuominen is the best crime writer in Finland right now. He has been for a long time… Arttu Tuominen explores how your sense of humanity can disappear under extremely harsh circumstances, what it is like to live a lifelong lie, and the possibility of mercy. The result is very different to other detective novels coming out of Finland right now; possibly ever. A captivating and surprising read from the master of his field.” — Kai Hirvasnoro, Kansan Uutiset newspaper

“The third instalment in Arttu Tuominen’s River Delta series is an interesting mixture of a contemporary detective novel and a historical war novel… Tuominen is an established detective writer and now he’s an emerging historical fiction writer, too… As a crime fiction novel, SILENCED is as sharp, fast-paced, and tidy as Tuominen’s previous books in the series… The storytelling in SILENCED is so fluent that you can easily race through 50 pages in a second. This, if anything, tells you what a talented writer Tuominen is.” — Jari Olavi Hiltunen, Satakunnan Kansa newspaper

“Tuominen skilfully combines elements of detective stories with elements of a historical novel. In this book Tuominen explores a timely topic: the involvement of Finnish volunteers in the German army during WWII. The book’s strength lies within its realistic characters, natural and concise dialogue, and its exciting, propulsive plot that keeps readers hooked right until the end. This book will surely be an international success—that’s how good this cinematic crime novel really is.”  — Anneli Airola, Länsi-Suomi newspaper

“Tuominen’s plot is propulsive and his language is easy to follow and understand.” — Leena Reikko, Kultuuri-toimitus magazine

“Tuominen tackles the most painful parts of our recent history with the precision of a surgeon, but he also manages to tell his story such that the reader is left to interpret events for themself and draw their own conclusions. The novel’s climax is phenomenally well plotted.” — Kirsin Kirjanurkka literary blog

“SILENCED is an addictive read. It’s the kind of book that you can’t look away from. I am in awe of Tuominen’s rich bank of ideas as well as how he tackles a variety of topics and looks at different themes from various perspectives whilst also leaving the reader room to think and draw their own conclusions. The story contained in SILENCED will stay with me for a long time.” — Kartanon kruunaamaton lukija literary blog

“Arttu Tuominen’s SILENCED is explosive. Given how much it hype it has received, and that I enjoyed his previous books, I knew I had to read it. Anyone who enjoyed THE OATH and JEOPARDY are guaranteed to love it!”   — Kulttuuri kukoistaa literary blog

“For the first time in decades, I got the feeling that I wanted to stay up reading the book all night. After finishing SILENCED, I went straight to the book shop and picked up THE OATH and JEOPARDY, too. And then I gobbled them up. Arttu Tuominen’s books really don’t let the reader get away easily!” — Kirsin Book Club literary blog

“Arttu Tuominen continues his strong, confident legacy. SILENCED is not silent; rather it is a jam-packed, finely balanced book that ticks every box: narration and language, character development, and character profiles that go beneath the surface… A sensitive and well-written crime book!” — Mummo matkalla literary blog

“I’ve said it before and I’ll say it again, Arttu Tuominen is the king of crime fiction.” — Kirjarouvan elämää literary blog

“Arttu Tuominen’s crime fiction novels share a lot with other crime fiction on the market but they bring a lot of new things, too. The way they are written is artful, the characters are realistic, and the crime and their consequences are multidimensional.” — LM-Mummin kirjastosta literary blog

“SILENCED is a convincing, high-quality continuation of the River Delta series. I’m sure this is one of the most eagerly anticipated crime novels of the year.” — Kirjojen kuisketta literary blog