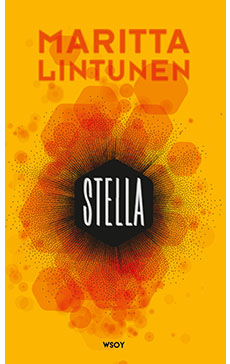 Be careful. The will of a well-intentioned person may be stronger than your own.

Liisa moves to Helsinki for the summer to study poetry. She rents a room in a former singer’s apartment. A trip that was intended to last a summer ends up lasting for years and the old diva weaves a web around Liisa, changing her forever.

Eventually Liisa becomes a single mother and a nurse, who remembers her youthful passion for writing poetry. Liisa’s son, Juri, intended to become a pianist but became a doctor instead. Only later do we find out why Liisa sold her piano and put a stop to her son’s lessons without asking him.

But when a chance encounter leads Juri to play accompaniment for a mezzo soprano with a fantastic voice and interpretive style, his passion is reignited.

In her fifth novel, Maritta Lintunen explores subjects close to her in a fascinating way. The grand piano and the body of a singer are delicate instruments that must be nurtured with care. But only enchantment can give music – and the best literature – a soul.

“When stars collapse, they lose their light. But when I collapsed, I became a star.”

2019, nominated for the Savonia Prize

“Stella is a a skilfully woven, intricate tapestry in which the protagonist shifts, from Sylvi and Liisa’s story in the beginning to Liisa’s son Juri’s story towards the end. Lintunen has depicted Juri’s life at the mercy of women in an interesting, topical way. Juri’s story forces the reader to think about the role of men in a world where women raise children.”  – Aamulehti newspaper

“The complete enchantment of music is like a star whose light keeps radiating even after it has burnt out. The novel portrays the timelessness of this art by highlighting the immortality of old masters.” – Etelä-Suomen Sanomat newspaper

“Power games and the enchantment of music: Maritta Lintunen’s new novel is a sharp examination of the use of power in teaching and intimate relationships… Maritta Lintunen’s novel both confirms and breaks down the myth of the artist… Lintunen offers a clearly conceptualised problem: how to face the gift and burden of art transmitted by the past. In such situations, mythical tones and greater powers become intertwined with everyday realism. People don’t make all their choices themselves.” – Helsingin Sanomat newspaper

“Many moving through the world of music deal with the topic of artistic genius from different angles. The gallery of characters includes diva-like, (head)strong and dramatic personas who come off as very believable in connection with the performing arts. The author’s strong musical background is the source of the work’s credibility and attention to detail: Lintunen has a masters degree in music.” – Suomen kuvalehti magazine

“Maritta Lintunen skilfully weaves a web of past and present, building the dramaturgy of the work with events from the past, which could not be written about without the present. The past is embodied by Liisa, who, in her youth, falls into the magic circle of Sylvi Indrenius, a former songstress. Sylvi had been a promising singer whose career of operettas and musicals hit the rocks. The former star crushes Liisa’s dreams of being a writer. Liisa becomes a single mother and Sylvi Indrenius starts to suck both Liisa’s and her son’s life into herself in a magical way. Finally, Liisa tears herself away from this atmosphere of almost morbid manipulation. In contrast, Liisa’s adult son Juri, a doctor who in his youth was a gifted pianist, represents the present. But, perhaps out of revenge, the artistically suppressed Liisa did not allow her son to have a future as a pianist, coldly stopping the boy’s piano lessons and selling the family’s piano. In the book, however, Juri is reunited with music when he takes part in a Lied course with his singer girlfriend as her accompanying pianist.

“I do not often read descriptions of classical music in novels without feeling awkward. Maritta Lintunen’s work is the exception that confirms the rule. The writer is profoundly familiar with her subject matter, even down to solo singing techniques and the alchemy and Lieds from the German romantic period. Her descriptions of music are poignant, touching and insightful. But despite what it may seem, Stella is not a novel about music. More than Schumann’s song cycles, the book ultimately makes the reader ponder moral questions. What become of a life when other people decide on the direction it will take? Who defines artistry and decides who can grow up to be a writer or a musician? Stella also raises questions about how much power stronger individuals have to manipulate weaker ones. Sylvi Indrenius is portrayed as a queen bee extracting nectar, but she could just as well be an orb-weaving spider.

“The deftly written text flows with short, clear and bright sentences. Sometimes they turn to pure lyric. The language of the novel is beautiful, but it carefully avoids the temptations of sappiness that loom over anyone who writes about music. The reading experience is complete and harmonious.

“In her earlier works, [Lintunen] has mentioned music in passing, but in Stella it lies at the heart of the events. Of particular importance is Robert Schumann’s song cycle Frauenliebe und -leben, an eight-song cycle written as a setting for poems by Adalbert von Chamisso that describes a woman’s life from her first love through her marriage to the death of her husband.” – Risto Nordell, YLE

“A fascinating and warm-spirited book that is pleasantly filled with different happenings of life. The stories of Sylvi Indrenius’ brilliant concerts, shown as old newspaper clippings, are exquisite. Music is a constant presence in the book.” – Leena-Maijan kirjasto blog

“The artistic characters are fascinating… as is the idea of how people’s actions, words and energy impact the development of others. A dominant personality can, even unintentionally, bludgeon and jostle. And do all sorts of other things. Music is not, however, the only theme of the book, although it provides a strong stage for the story. Stella is also a novel about people’s capacity to live lives that resemble their dreams. A central theme is the idea that an artistic gift can be both a blessing and a curse. In the right hands, it can be harnessed into something amazing, while in the wrong ones it can lead to destruction. Finally, the novel addresses the crushing power of jealousy, whose dark shadows can even transcend generations.” – Järjellä ja tunteella blog