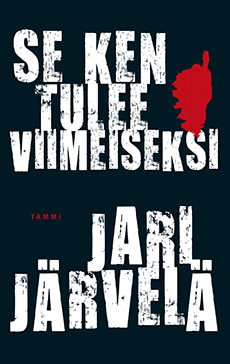 And Then There Were None meets The Hunger Games.

Ten trekkers meet for the first time at a campfire on mountainous Corsica. Their task: complete Europe’s most challenging hiking route, the GR20, in two weeks. The competitors have been hand-picked from among thousands of applicants by Mr North, a mysterious figure who made his fortune in gaming. The million-euro prize will be divided equally among those who make it to the finish line alive.

A relaxed ramble quickly turns into a desperate battle for survival, as inexplicable deaths start to mount on the trail. The competitors know the smaller the group gets, the bigger the pot at the end grows. On top of that, they have also angered the hot-blooded islanders – and vendetta is Corsican for blood vengeance.

Jari Järvelä (b. 1966) writes novels, radio plays, librettos, and travel stories. He has a three-stripe brown belt in karate and lives between sea and stream in southern Finland. On holiday he finds himself seeking out higher altitudes: most recently Järvelä followed the footsteps of the Incas in the Andes.

“Jari Järvelä’s thriller Ten Little Trekkers has a wide array of influences, from Agatha Christie’s classics to Clint Eastwood movies. The smoothly flowing thriller culminates in a battle for survival. (…) With its visionary prowess, it still manages to reveal the beast raging in all of us.” – Aamulehti newspaper

“Ten Little Trekkers is a refreshingly different thriller in many ways. (…) Järvelä says his strengths as a thriller writer are his use of living language and richer-than-average character description. (…) I would add to that list insightful descriptions of the milieu and the ability to create dense prose – a vital skill for an author of thrillers.” – Kirsin kirjanurkka literary blog

“Järvelä imbues his gang of adventurers with an impactful paranoia, and everyone takes a turn being the suspect. The work easily brings to mind Agatha Christie’s And Then There Were None, and James Dickey’s Deliverance is also a relevant parallel (…) Encounters with the local population take on a threatening, even violent character. Järvelä has always been skilled at creating action scenes, and this work guarantees a large helping of these, as is typical of a devilish thriller. Ten Little Trekkers is a very good thriller.” – Kirjavinkit literary blog

“Jari Järvelä’s game of elimination in the action-packed novel Ten Little Trekkers will make the hairs on your neck stand up. The reader strolls nonchalantly along with the group, with a murderer at their heels. (…) Ten Little Trekkers is also a psychological journey into the mind. At wit’s end, control breaks down, and even the slightest movement could be fatal. Could any of us become a murderer under the right conditions? The question is chilling. (…) But even on a harrowing journey, there are quiet moments, enticing dialogue and even accidental humour. And the imagery is delectable (…)” – Kirjasta kirjaan literary blog

“(…) a fantastic book, tight, dense and thrilling. A brutal story, people are capable of all sorts of unsavoury things when you put them in hard enough circumstances and push them in the right direction.” – Mikko Saari, GoodReads

“An original detective novel still aware of traditions, in which the bleakest sides of humanity and, on the other hand, the black mockery of destiny intertwine into a titillating tapestry. I like Järvelä’s way of telling and weaving the story, indulging in mystery and being serious all at the same time. In some strange way, I also felt like going hiking. Although maybe not on the GR20 path just yet…” –“JaanaMi”,  Goodreads