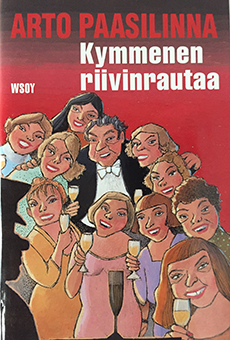 Factory manager Rauno Rämekorpi is a charming man who knows how to get on the right side of pretty much anyone… especially when it comes to women.

Ten Shrews kicks off on Rämekorpi’s 60th birthday in Westend, an affluent area in southern Finland. After his party, Rämekorpi’s wife sends him to the tip to get rid of his birthday flowers because they’re causing her asthma to flare up. What should have been a straightforward journey turns out to be anything but. On a whim, Rämekorpi decides to carry on driving in order to deliver flowers to every woman he has ever known. Needless to say, this includes individuals from many walks of life.

There’s sixty-something Sonja from Helsinki; metal worker Eveliina from Rämekorpi, who is suffering from a coronary heart disease; and fine arts lecturer Tarja from Malmi, to name but a few. Each of the women Rämekorpi meets has their own life story, and Paasilinna ensures that every new character is as distinctive and interesting as the last.

Ten Shrews was adapted for film in Finland in 2002 (dir. Ere Kokkonen).

“His latest novel, Ten Shrews, tells of a Finn who receives so many flowers on his 60th birthday that he decides to distribute them among his 10 former lovers. It has sold 126,000 copies since publication last autumn. He was asked in a telephone interview how much of the book is autobiographical. ‘Some features,’ he allowed, ‘but not the 10 women’.” – The New York Times