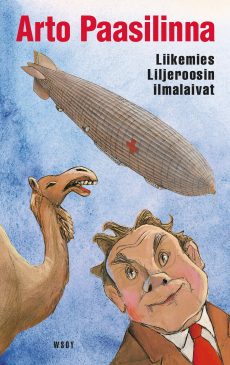 The Airships of Mr Liljeroos

An audacious novel and a thrilling adventure about coming together in the face of a natural disaster.

Businessman Lars Liljeroos has built an airship to promote his brewery. When Hemmi Elstelä catches wind of this new invention, he decides to organise his own airship construction project. His airship is called Muhos Mimmi, and it’s made of materials from all over Europe.

Meanwhile, Finnish heavy metal band Black Shotton board a third airship, embarking upon a world tour that takes them all the way to Tibet! The international media are obsessed: they’re following the airship’s every move. But that’s not all! There’s also Turkish pilot Skutari Örvesti; the artistic Roope Ryynänen; Tshen Mikila, a defective merchant from North Korea and… could that be a camel in the sky?

The Airships of Mr Liljeroos is as fun as it is serious: ultimately the international airship passengers must come together to provide humanitarian aid in the face of a dangerous earthquake.

“Paasilinna’s mythical journey ends with a rescue mission. This is not just a humorous novel. Rather, its moral story elevates it to an especially humane level whereby people from a diverse range of nationalities must work together to help each other out. In addition to all of this, this is a funny and slick book; it is by Paasilinna, after all.” – Turun Sanomat newspaper