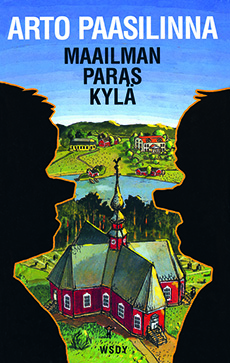 The Best Village in the World

A lively tale about a self-sustaining community that’s founded by the son of a dying arsonist.

Former arsonist Asser Toropainen doesn’t regret burning down all of those churches. And yet, on his deathbed, he seems to have softened. The old man invites his grandson Eemeli round, and he gives Eemeli a mission. First Eemeli must establish a Dying Church Foundation and then he must build a church to replace those that his grandfather burnt down. Perhaps Asser did have a couple of regrets after all?

Inspired by an old wooden church, Eemeli builds a handsome new church in Sotkamo. Upon completion it attracts a diverse crowd, and they soon form a lively, self-sustaining community. One thing’s for sure: life in the best village in the world is far better than wallowing in the recession outside.

“Paasilinna is a kind of Finish Vonnegut, an unbridled fantasyist. The Best Village in the World is simultaneously a dismal anti-utopia and a joyful utopia.” – Aamulehti newspaper

“The best thing about Paasilinna is his madness. He creates astonishing situations and gives them believability.” – Helsingin Sanomat newspaper