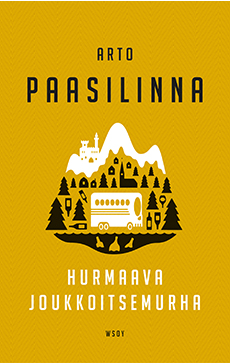 Two depressed men decide to found a ‘Let’s do it together’ suicide association to help the suicidal reach their goal.

Onni Rellonen has reached a dead end. The only way out seems to be a revolver and a secluded barn. But when Rellonen arrives at the barn, he’s surprised to find that someone else has beaten him to it: Colonel Hermanni Kemppainen already has a noose around his neck.

The two men realise they have a lot in common and decide to support each other from here on out. Together they place an advert in their local newspaper, which prompts over 600 responses from suicidal individuals.

With strength in numbers, Rellonen and Kemppainen decide to form a suicide association in order to help everyone achieve their shared goal. The story reaches its climax as a busload of suicidal individuals embark on a trip across Europe in search of the best spot for a mass suicide.

A Charming Mass Suicide is one of Paasilinna’s most popular titles. It’s a joyful celebration of life that shows off his exceptional talent for dark comedy. Delving into the gloomy Finnish psyche, A Charming Mass Suicide ultimately turns the group’s misery on its head and showcases a surprising zest for life.

A Charming Mass Suicide was adapted for film in Finland in 2000 (dir. Ere Kokkonen). It was also adapted for a musical in South Korea in 2009.

“A novel which makes us laugh and also causes us the deepest compassion, a ‘road movie’ reflecting on the suicide in the funniest way.” – Deia, Spain

“Despite what we may think from the title and from the first pages of this book, this is not only about suicidal plans but actually, a hymn to life – which resists despite everything, wants only to find its own way outside conformism. Life is hard but when we meet people that feel the same we may reconsider certain thoughts, decisions. This book is also an invitation to friendship, to sharing, but not the superficial one, the one that really manages to enrich, to give a new perspective, new hopes, desire to live.” – Nico J. Genes blog