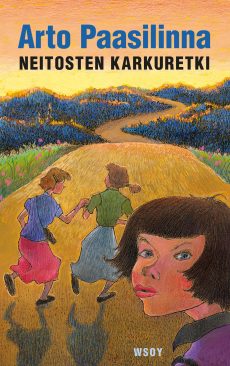 The Flight of the Maidens

A poignant and touching summer tale about three wild orphans who embark upon the trip of a lifetime.

Set in 1965, The Flight of the Maidens follows the story of Stina, a girl who has had a tough childhood and lives in the dreadful Kaksisaari orphanage. Along with her friends Roosa and Meer, Stina decides to escape from the orphanage. The trio hope to make it to Stina’s father’s cottage in time for Midsummer.

The Flight of the Maidens is a story that captures the wild spirit of three young girls as they embark upon the trip of a lifetime. At points they make childish decisions and show their age, but the girls’ resourcefulness shines through as they’re chased through Uusimaa by conscripts and policemen.

At its heart, The Flight of the Maidens is a story about a group of young girls whose fate has been predetermined by a group of men. It’s a poignant as it is touching.

“The Flight of the Maidens shows off Paasilinna’s playful humour at its best. Paasilinna is especially adept at striking the balance between crude and jovial humour… in this book Paasilinna weaves loose jokes into a coherent story. The fact that he manages to do this so well is what makes Arto Paasilinna Finland’s official post-Veikko Huovinen humourist.” – Savon Sanomat newspaper