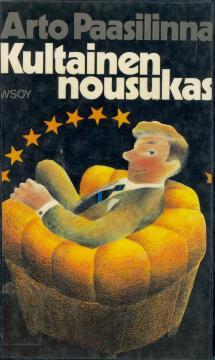 A biting post-war satire about a boy with big ambitions who is determined to create his own luck.

A poor boy is born in the remote village of Salla. To make matters worse, he’s immediately rejected by his mother. But this boy isn’t prepared to accept his fate: he’s got ambitions and a real thirst for life. Askeli soon learns that if he’s going to be happy, he’s going to have to create his own luck.

Askeli’s first taste of business comes when he’s just 15-years old and he joins forces with a salmon seller in Oulu’s market square. It’s not long before the boy is running his own fishing business in Norway and founding a photography shop.

The entrepreneurial boy continues to establish valuable contacts and he expands his empire until, one day, fate intervenes. He needs to reassess everything.

“All in all, a great book. As I was writing this blog post, I felt a smile creeping onto my face; that’s how wonderful Askeli’s antics were.” – Sanojalauseita blog