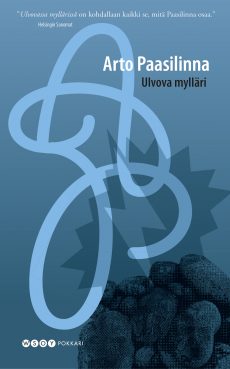 A fable of freedom and the Finnish backwoods featuring Huttunen, an eccentric outsider swimming against society’s current.

Gunnar Huttunen is a troubled man. He fought against the Russians in World War II and watched his wife burn to death. Now, having bought a dilapidated mill on the Kemijoki River, he’s determined to start a new life in Lapland.

There’s just one problem: Huttunen howls at night and there’s nothing he can do about it.

The local villagers are scared. They’re closed-minded at the best of times and now they’re determined to run Huttunen out of town.

Luckily, there’s one person on Huttunen’s side: a young and beautiful agricultural advisor who has fallen madly in love with him.

The Howling Miller paints a crystalline portrait of society and what it means to function outside of its norms. It’s a narrative tour de force told with verve, humour, and a touch of the bizarre.

The Howling Miller was adapted for film in France in 2017 (dir. Yann Le Quellec) and Finland in 1982 (dir. Jaakko Pakkasvirta). It has also been adapted for stage and performed at the Quantum Theatre at Frick Park Environmental Centre in Pittsburgh.

“Even a glimpse of Paasilinna’s singular vision of freedom and persecution proves beguiling.” – The Guardian, UK

“The narrative, with its episodic chapters and fablelike tone, follows Huttunen’s interactions with an amused eye . . . Paasilinna describes the frenetic inner workings of his characters’ minds with an expert touch . . . It is Paasilinna’s gift in this gem of a novel to wring humor from the most desperate circumstances.” — The New York Times

“The Howling Miller has the feel of an ominous Hansel and Gretel-style bedtime story—part myth, part fable and part novel—a form that has a funny way of bypassing the head and directly affecting the animal instincts.” – The LA Times

“The Howling Miller is a novel in praise of outsiders and victims, composed in a disarmingly child-like style that makes its very adult message difficult to forget.” – The Skinny

“There is much to like here—wit, pathos and just enough of the extraordinary to transform the novel into a kind of modern fable.” – Kirkus blog

“The Howling Miller is, like The Year of the Hare, a breezy, pleasant read. Paasilinna is a natural storyteller—these stories give the impression of having jumped, fully formed, from his pen to the page, or of having been passed down orally—and there’s something in his tone, or in his style, that makes his stories seem almost mythological. He has a very compelling method.” – Three Percent blog