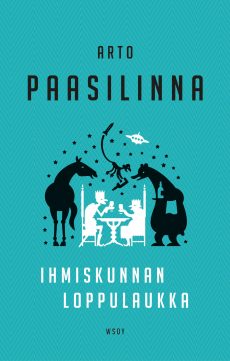 The Last Lap of the Human Race

A riotous science fiction novel set in an imagined future in which mankind faces extinction.

It’s the year 2005, five years in the future, and statistics show that mankind is not far from extinction. Birth-rates have fallen dangerously low: children simply aren’t being born anymore.

Tarmo Saamakorpi, a former vet and legendary horse trainer, decides to take matters into his own hands. With Haaveri-Aaroni as his faithful steed, he gallops off to find women, only this time his motives are entirely selfless. The human race must be saved, and Saamakorpi‘s got steam in him yet!

Fast-forward to 2010, and a healthy boy called Toivo Armas is finally born. He’s a global sensation! The boy grows up, surrounded by horses, with his father and midwife as parents. But what will the world look like when it runs out of people? Can the youngest man alive save the day? One thing’s for sure: he’s got his work cut out for him.

“Arto Paasilinna takes readers into the new millennium with this juicy fantasy. The end of mankind is drawing ever closer, but he takes us there with speed and style. It’s very Paasilinna.” – Rising Shadow blog