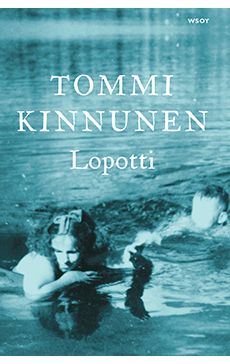 The Light Behind the Eyes

A searing novel about the difficulties of finding your own way. Winner of the 2016 Public Readers’ Vote Finlandia Prize for Fiction, with 54,000 copies sold in Finland

Helena is just nine-years-old when she is uprooted from her small village and sent to a school for the blind in Helsinki. Gradually she learns the smells, sounds, and footstep counts of the big city. Forty-years-later, Helena’s nephew Tuomas voluntarily makes the same move. A university student, Tuomas wants to meet demands and expectations, but he secretly dreams of having a family of his own. During his southern sojourn, Tuomas comes to know his aunt in a wholly new way.

What is it like to live your whole life as a bystander, to hope that one day people will focus less on the differences that separate you and more on things you have in common? What is it like to embark upon a long journey in order to become the person you want to be, or perhaps already were?

Tommi Kinnunen writes compellingly about otherness and finding your own path, the desire to become a father and the skill of being a mother.

Tommi Kinnunen (b. 1973) was born in north-eastern Finland. He currently lives with his family in Turku and works as a Finnish language and literature lecturer. His debut novel Where Four Roads Meet  was a stunning critical and sales success, with translation rights sold to 14 countries within its first year. His second novel The Light Behind the Eyes was shortlisted for the Finlandia Fiction Prize in 2016 and immediately topped Finland’s bestseller lists. The Glass River, his much-anticipated third novel, sold 20,000 copies within a week of publication.

“The Light Behind the Eyes continues the story of the Löytövaara family as introduced in Where Four Roads Meet. The focal characters are the blind Helena who has a determined character and sense of humour and who is building her life in Helsinki, and Tuomas, a student looking for his happiness in the gay circles of Turku. Kinnunen firmly integrates his characters as parts of a family, a family history and the environment. The novel draws a full-bodied picture of a life in which ‘one has to decide whether to be afraid of the world or not.’ Tommi Kinnunen is wisely and warmly present in his text, but the text is breathing, leaving room for the reader, too.” – Statement of the Jury, Finlandia Fiction Prize

“A passionately and purposefully constructed novel… The episodic structure has been maintained, as has Kinnunen’s ability to capture a great amount of feeling in small snapshots of time. Again there is no actual plot: only a series of lifetimes that inevitably move forward, and a series of blows from life, both in one’s face and below one’s belt.

“Within the story Kinnunen also provides a cruel and tragic twist with a skill of a thriller author, hitting the reader hard… This is Kinnunen’s message, surprisingly familiar and… repeating itself and getting stronger throughout the novel: you cannot escape from your family. That is why the family also carries you forward.

“Some of the family scenes of The Light Behind the Eyes are downright idyllic: a gathering at a summer cottage in the sunshine; a grandmother gifting casseroles to her grandchildren. This is not idealization but rather like observation. We have seen how deeply the members in the Löytövaara family have hurt one another for decades, both intentionally and unintentionally. Yet the ties are maintained. The tie between the little brother and the big sister, the bond between the father and the child.” – Suvi Ahola, Helsingin Sanomat

“The Light Behind the Eyes raises important thematic issues. In addition to this, the novel’s narrative is very skilfully and diversely constructed.” – Kaisa Kurikka, Turun Sanomat newspaper

“Shivers ran down my spine when I read the first two pages – a letter from a father to his unborn child – of Tommi Kinnunen’s novel The Light Behind the Eyes… Kinnunen writes impressively polyphonic prose. He has both the ability to express a wide range of people’s innermost feelings and the ability to effectively convey events and moods. Kinnunen’s prose is ambitious, and yet there is a carefree essence to his writing. The feelings can be sensed both in the words and between the lines. The Light Behind the Eyes is a perfect whole in which the structure supports a story and in which the theme of being different takes shape in both the similarities and particulars of the narrators. With his family saga, Kinnunen illuminates Finnish society across decades. Even though the family is at times the worst in The Light Behind the Eyes, it is also the best. In the world of the novel, the extended family holds real significance, both as the constructor of identity and as its support mechanism. If you are different, the opportunities offered by the world are narrower, and Helena and Tuomas appear as their own selves only to their family members.” – Marjaana Loponen, Aamulehti newspaper

“The Light Behind the Eyes is a shaking description of deprivation and of wanting to be an approved member of a community. Can one write with greater humility, with more pain and with more depth about what it is like to be a human being – a member of a family, which is the result of one’s genes, education, environment and nature? Tommi Kinnunen has confirmed his position as a chronicler of Finnishness.” – Seija Forsström, Kouvolan Sanomat newspaper

“The Light Behind the Eyes is like a feast of reading; it is exactly the kind of a work you will force yourself to find the time to read, and a story in which you get so totally immersed that the world around you disappears.” – Kannesta Kanteen blog

“In The Light Behind the Eyes Tommi Kinnunen  describes alienation with a very skilful narrative technique and with alternating points of view… And how beautifully Tommi Kinnunen writes, how sensitive is his pen, especially when observing things from the perspective of children! The most overwhelming parts of The Light Behind the Eyes are precisely the images of Tuomas and Helena’s childhood – when a child observes, watches and listens to the world of adults. In depicting childhood, Kinnunen is a real master. And when reading Kinnunen’s story one does empathize strongly with the protagonists. One really wants these people to succeed; one does wish the best for them. But life also provides heavy disappointments. Tommi Kinnunen is one of the most interesting Finnish writers at the moment. Two first-class novels is a fantastic performance from any author. The Light Behind the Eyes is a beautiful, sympathetic, sometimes even overwhelming depiction of the fragility of human happiness – about how complicated life really is. Even at this point in the year, I dare say that The Light Behind the Eyes is one of the best novels of 2016. Highly recommended!”– Kirjavinkit blog

“Blimey, Tommi Kinnunen did it! This fussy woman feels that she has read a piece of literature at least as strong as Where Four Roads Meet and predicts, as she did with his debut novel, that Kinnunen’s The Light Behind the Eyes will be shortlisted for the Finlandia Prize, and will even be the winner. Tommi Kinnunen writes perfect prose with a touch of lyricism. He writes wonderful sentences, perfect dialogue, and portrays a strong family saga in which one will continue to marvel at how well he manages to get into the skin of women.” – Leena Lumi blog

“The debut novel Where Four Roads Meet was the best Finnish book I read that year, and in some miraculous way Kinnunen has done it again. In fact, The Light Behind the Eyes strikes me emotionally at least as hard as Where Four Roads Meet, perhaps even stronger.” – Kirjasta kirjaan blog

“The Light Behind the Eyes provides moments of admiration both with the craftsmanship of its sentences and with its powerful depictions of the diversity in the spectrum of life.” – Tuijata blog

“Breathtaking… lyrical… Kinnunen’s descriptions are so true to reality that the reader is startled by the black in front of his own eyes, as he tries to imagine Helena’s blindness.” – NRC newspaper

“The Light Behind the Eyes is like the Finns themselves: at first glance a bit stiff – you become occasionally dizzy with the names and endings – but full of warmth and depth when you find the key. A book to read at least twice. So you are more and more attracted by the ordinary, but oh so stubborn and combative Northerners. To read Kinnunen is to understand the Finnish soul.” – Hebban Review blog

“A heavy and sad novel, but worth it until the very last page.” – Maemaailm blog

“It is intense to be the blind daughter in a family of photographers… Kinnunen’s nuanced language, dealing with children’s grief and their ability to seek comfort in one another and in secret corners of a house, is exemplary. This is, on many levels, a dark novel, with an underlying Strindbergesque tone: men are to be pitied… The young and, one must be allowed to say, promising Kinnunen, is one of several good Finnish writers on the way up in Nordic literature.” – Klassekampen

“The Light Behind the Eyes draws its characters so clearly and poignantly that it becomes timeless. – Politikken

“A fantastically good book!  I am fascinated by the way Tommi Kinnunen writes. It is so catchy, personal and believable. Fantastically great books, both of them.” – Kleppanrova blog

“A wise and moving story about the fate of a multigenerational Finnish family. Perfect for reading as aontinuation of Where Four Roads Meet, but equally addictive as an independent work.” – Queer

“Tommi Kinnunen is a writer who does not simplify. He dares to linger in the irreversible emotional fluctuations of the people, and he does it with a language that has both drive and a sensitive presence. Now it remains to be seen where what direction his career will take: where can he throw his searchlight outside the framework of the family story?” – Barometern

“Rarely do I meet characters in a novel who have such strong wills and who do not let themselves be overpowered. They have a steady drive and an impressively strong will to live when their backs are up against the wall. In family relationships, ambition is allowed, but it is shadowed in the next moment of debt and vulnerability… When I finished reading, I was overcome and I dried the tears that I could not hold back. So relentless is life, too. It ends one day.” – Lena Nöjd, Dagens bok

“Kinnunen’s novel holds the reader in its hands with confident empathy and fascinating clarity… And the whole story, it is simply good literary art.” – Kuriren

“Detailed and coming in close… I liked this story for its… closely approaching descriptions, for the grit and the secrecy that characterized both people and nature.” – Sydsvenskan

“And the whole story, it is simply good literary art.” – Norbottenskuriren

“Tommi Kinnunen is a writer who does not simplify. He dares to linger in… the irreversible emotional fluctuations of the people, and he does it with a language that has both drive and a sensitive presence.” – Blekinge Läns Tidning