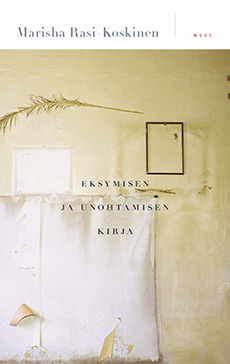 The Map of Going Astray

A novel about an encounter that can turn time on its end.

Julia is heading off on a trip. Her mother and father talk of an outing, an excursion, but something is not quite right: why must they leave secretly at dead of night and drive day after day, almost without stopping?

Jan finds numbers infinitely more interesting than people. He is sent to a camp to make friends, but the boys’ hiking expedition turns into a struggle for survival in the wilds.

The fates of Julia and Jan are fused and melded together, like fading ink on the pages of an old notebook. Something seems to be drawing the two lost souls towards one another and to a mysterious house that Julia catches glimpses of in her dreams.

Marisha Rasi-Koskinen writes about people whose coping mechanisms involve choices between remembering and choosing to forget. At the core of The Map of Going Astray is time and its pendulum motion, which cannot be halted.

“Marisha Rasi-Koskinen’s work is, on one level, a story of different experiences of poverty that drive the characters to take even desperate actions. On another level, the work is a philosophical discussion of identity, remembering, forgetting and getting lost. The meandering stories sometimes even lead their reader astray. Rasi-Koskinen’s magic realism and narrative style keep the reader interested, and the language of the work is beautiful.” – City of Tampere Literary Prize

“(…) The Map of Going Astray is a nearly perfect novel. Every sentence in it is beautiful and notable. The story keeps the reader in a state of titillating excitement from start to finish. The structure is interesting, playing with jumps in time, changing narrators and the logic of dreams, and it gives the work its own meaningful dimension.” – Aamulehti newspaper, Finland

“Rasi-Koskinen’s style pulls the reader into a position to make creative observations. The novel is open, with a lyrical tone.” – Savon Sanomat newspaper, Finland

“I like the author’s style, as it mixes together streams of consciousness, magic realism, bildungsroman and misleading the reader. Not everything is told, so some things remain open.” – Ullan Kirjat literary blog