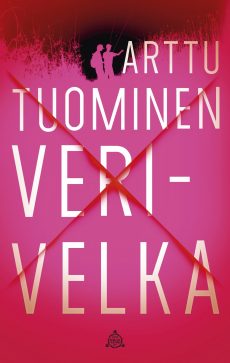 A suspenseful series in which individuals are forced to choose between their morals and their duties by an acclaimed, new voice in Nordic crime fiction.

The Oath, the first book in the River Delta series, asks what happens when friendship comes up against the law?

In late autumn, a man is found dead at a summer cottage. A group of old friends have congregated for a few days of drinking, but everything goes wrong when one of the men winds up getting stabbed. When barely any mourners show up to pay their respects, it transpires that the victim has an exceptionally violent criminal background of his own. Police Commissioner Jari Paloviita, who is assigned the case, is horrified to learn that the suspect is his childhood best friend, an old classmate of Jari’s who grew up on the wrong side of the tracks, but stood up for Jari as he was relentlessly bullied at school, with the two boys taking a blood oath together.

In skilfully constructed flashbacks, Tuominen explores just how lasting the effects of our childhood traumas can be, and how the lives of two old friends can ultimately take two wildly different paths. In the end it is up to Jari to decide whether his loyalty to his friend holds more weight than his legal duty.

Henning Mankell meets Stephen King’s The Body in this touching and compelling crime novel about secrets, guilt and duty.

Arttu Tuominen (b. 1981) is a Finnish environmental inspector moonlighting as a crime writer. Tuominen was awarded the ‘Johtolanka’ Prize for The Oath, garnering praise for the novel’s cleverly constructed flashbacks and realistic dialogue, making him eligible for the Glass Key Prize. Tuominen’s writing is distinctive for giving a compassionate and relatable voice to those on both sides of the law. He lives in the south-western Finnish town of Pori with his family.

2020, The ‘Johtolanka’ Prize from the Finnish Whodunnit Society
2021, Nominated for the Glass Key Award

“Finnish author Arttu Tuominen shoots for the great novel, and he succeeds… You have to bow down in amazed respect for the Finns who makes us southern Scandinavians look like overprotected and spoiled children.” – Weekendavisen newspaper, Denmark

“The plot shifts easily between the past in 1991 and present in 2018. It is marvellously done. With the particular Finnish-ness of sun and a summer spent between lakes, then a melancholy winter spent in great forests… THE OATH has been chosen as this year’s best Finnish crime novel. That is understandable… this is certainly one of the more original ones.” – Bo Taoi Michaelis, Politiken newspaper, Denmark

“A spectacular Finnish crime novel… What looks like a regular murder investigation turns into a brilliantly plotted crime novel about ethical dilemmas and loyalties… No wonder that Tuominen won the award for the Best Finnish Crime Novel this year.” – Jyllands-Posten newspaper, Denmark

“Arttu Tuominen’s latest detective novel is his best yet. I’d even recommend it to those who aren’t diehard crime fiction fans… It’s an unusual thriller. The novel’s crime is ostensibly about a day-to-day drunk tank. But its most thrilling parts stem from past events and an acting superintendent’s internal moral struggle.” – Sini Kuvaja, Satakunnan Kansa newspaper

“Arttu Tuominen is the hot name in crime fiction at the moment. His latest novel, THE OATH, has garnered an exceptional amount of praise from readers… Arttu Tuominen’s trademark style is building real, authentic excitement without letting brutality overshadow proceedings. [THE OATH] has received positive feedback in Finland from men and women alike. There is clearly an appetite for Tuominen’s style of crime fiction.” – Iltalehti newspaper

“Tuominen has written an ambitious book: on the one hand it’s a straightforward crime fiction novel; but on the other it’s a coming of age story that draws on events that took place many years ago, in which children become men. It is situated in a world in which a father’s choices and actions affect the cards his son is dealt…. In every decent crime fiction novel, the plot and characters come together to keep the reader hooked. This is exactly what happens in THE OATH.” – Petri Immonen, Helsingin Sanomat newspaper

“Tuominen’s writing is reminiscent of Stephen King and the late Matti Yrjänä Joensuu, the great Finnish crime fiction writer. In Tuominen’s book, both the police and the other characters are multidimensional people; crimes are not committed within a vacuum and there is no external evil that is easy to blame and punish.” – Susanna Liukku, APU magazine

“A crime novel about a school bully’s problematic family and friendship, THE OATH surprised me and captured my attention immediately. The writer’s societal prowess brings depth and ethical reflection to the plot. The multi-dimensional characters are reminiscent of Matti Yrjänä Joensuu’s wonderful Harjunpää books. But this new crime series has its own strong voice. THE OATH is touching and timely.” – Maija-Liisa Ahonen, Opettaja-lehti magazine

“The novel’s protagonist, acting superintendent Jari Paloviita, is reminiscent of many of Patricia Highsmith’s characters: one or two innocuous acts inevitably trigger a slippery slope and, once you’ve started slipping, you can no longer stop.” – The Finnish Whodunnit Society’s ‘Johtolanka’ Prize jury

“The tension [in THE OATH] is intense and, while the reader is able to deduce quite a lot from the clues they are given, the story is still suspenseful and its various twists and turns take the reader by surprise… When I heard that Tuominen was writing a new series of crime fiction novels based in Pori, I had high expectations. And THE OATH did not disappoint; in fact, quite the contrary. As soon as I opened the book, I was immediately sucked in and I devoured the 400-page novel in a couple of days… The best detective stories are those that are not explicitly ‘just’ detective stories but combine many different genres. THE OATH is anything but a traditional detective novel, even though it is based around a criminal investigations unit. I would even recommend this book to readers who aren’t normally fans of detective and crime fiction novels.” – Kirsin kirjanurkka literary blog

“There is no doubt that this is Arttu Tuominen’s best novel to date.” – AMMAN literary blog