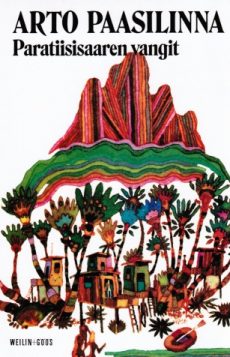 Paasilinna reinvents the literary topos of a desert island in a way that only he can.

A plane on a UN mission is forced to perform an emergency landing in a remote corner of the Indonesian archipelago. Its passengers include Swedish midwives, Finnish lumberjacks and Norwegian doctors. Along with the plane’s English pilots and air stewardesses, they decide to make the most of their situation and settle down on the island.

The castaways’ shared goal is to organise life so as to maximise their own happiness. Filled with anarchistic, crazy and rebellious characters, Prisoners of Paradise tells the story of an imaginative utopia with irreverent humour.

Paasilinna reinvents the literary topos of a desert island in a way that only he can, suggesting that a fair distribution of wealth and justice—paired with liberation from civilised structures—might just lead to happiness. Maybe.

“In a sense, [Prisoners of Paradise] is based on the same premises than most of Paasilinna’s novels, namely a group of people—most usually Finns—separated from society by choice or by circumstances… Prisoners of Paradise is a well-done remake of the Robinson novel, which ends up providing a very good pace, with a true story and strongly defined characters. Even the overall Rousseau-ian message of longing for the ‘state of nature’… is of the socialist-libertarian type. Above all, it is a funny novel.” – Xi an’s blog