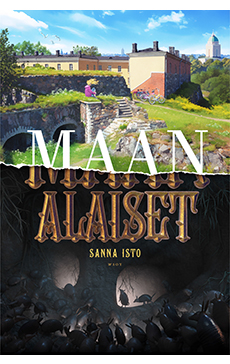 WINNER OF THE ARVID LYDECKEN PRIZE 2017

Is how we look all that we are? An amazing adventure awaits a girl who must prove otherwise.

One morning, Metuli, a girl on the verge of teens wakes up as usual at her home. Next moment she is huddled on the cobbled street outside. Her dad has just chased her out of the house like some disgusting rat! What is going on?

It takes a moment for Metuli to understand that overnight she has transformed into a strange creature. Not a rat but close enough. And someone is inside her human body – pretending to be her but managing to be all that Metuli isn’t. Who is this cruel and sneaky imposter? Metuli must find a way to claim back her body, to cancel out this identity theft before it is too late.

Surely her best friend Ama will recognise her, the real her – beneath any exterior? But how can anyone prove who they are? Is how we look all that we are?

Until she finds answers, Metuli is forced to live among the strange erwins, these creatures who have lived on Metuli’s home island since the 16th century. She comes to understand the multi-layered past of the island, and herself, before anything is resolved.

The story is set on the Suomenlinna Island, off the coast of Finland. This mesmerizing fortress island is a UNESCO World Heritage Site and boasts an exciting history which Isto has woven into her storyline.

Sanna Isto is a Finnish children’s and YA author. She currently lives in Berlin and has previously worked in London, Paris and Stockholm. In 2012 she won the Finnish YA Society’s Arvid Lydecken Prize for her debut title “Tinka and Taika”.

Sami Saramäki’s black and white illustrations accompany Isto’s storyline beautifully. They provide an enchanting portrayal of the historical fortress island of Suomenlinna, both above and below the ground.

2016 Shortlisted for the Finlandia Junior Prize