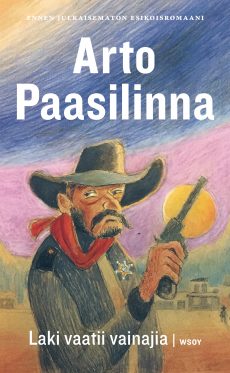 The Sheriff of Denver

Arto Paasilinna’s first ever novel. Written by a 16-year-old Paasilinna, this clever and addictive Western was published posthumously last year.

The previously unseen The Sheriff of Denver was written and illustrated by a 16-year-old Arto Paasilinna. Having given the book’s manuscript to his son Petteri, Arto Paasilinna asked that it was not published during his lifetime.

Now, a year after his death and 60 years after it was written, The Sheriff of Denver is published for the first time.

Even as a child, Paasilinna was known for entertaining his friends and family with wild stories. The Sheriff of Denver is an addictive Western adventure; whose protagonist is the sheriff, a man with a penchant for whiskey. Paasilinna describes him as “a proper sheriff: with enough criminal tendencies to do a good job of it”.

It’s a clever story that’s full of twists and turns, and it showcases a young Paasilinna’s dark humour at its finest. The novel tells the story of a “society of criminals”, from the perspective of a struggling Sheriff who comes up against mail robbers, an overzealous district sheriff and the unrelenting Christian Women’s Association. Playing with stereotypes throughout the novel, a teenage Paasilinna is delightfully entertaining.

Whether the novel’s ending is uplifting or downbeat is up to the reader to decide, but the book’s final line is clear: “Unfortunately this book ends here.”

“Spending over 60 years in the author’s archives, this book is titillating entertaining and insightful. Arto Paasilinna clearly discovered his humorous writing style early on. Perhaps the most surprising thing about the book is that Paasilinna wrote it as a schoolboy. It really doesn’t read like a ‘teenage boy’s writing’… It may well be that Arto Paasilinna decided: I’ll keep surprising readers even after I’ve been declared dead. Well, he certainly succeeds in doing so.” — Ilta Sanomat newspaper