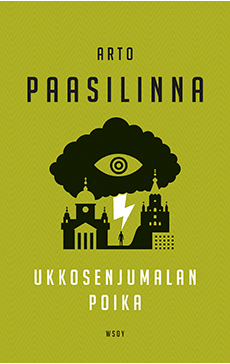 The Son of the Thunder God

The Finnish people clearly no longer believe in their own God. This is the conclusion drawn by a crisis meeting consisting of pagan deities. That’s when Ukko, the supreme god, decides to intervene. He sends his son, Rutja, to earth in order to convert Finland’s people back to their true religion.

But Rutja needs a disguise, otherwise the Finnish authorities might just step in. He swaps places with Sampsa Ronkainen, an easy-going Helsinki antiques dealer and a true believer. Next, as if on cue, the beautiful Helinä arrives to audit Ronkainen‘s accounts. Rutja secures his first disciple. From here on out, things happen at breakneck speed.

As a wave of change sweeps across Finland, government officials can only look on with bated breath. Soon enough, everyone is building an altar to Ukko. It is a new age of miracles, and man is once again able to reach the ancient powers of the earth.

Numerous stage adaptations have been made of The Son of the Thunder God.

“This book is funny and focussed, reading is as smooth as a dance; the characters contain appropriate amounts of caricature, they’re believable and the plot is deliciously juicy. An excellent book! The story is fast moving and has an addictive arc… Paasilinna is clever, really clever, which comes as no surprise. The text is so smooth and fluid that it’s a real joy to read.” – Suketus blog