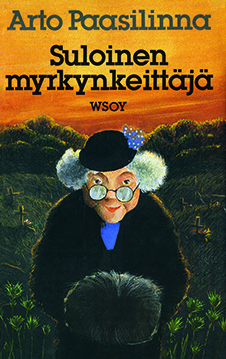 A hilarious crime novel about an unexpected killer who dresses in old lace and spikes drinks with arsenic.

Linnea Ravaska lives on a small patch of land in the remote village of Harmisto. From the outside, it looks perfect: a red cottage surrounded by blooming roses and cats roaming around in the garden. But today it’s pension day, and Linnea is nervous.

Like clockwork, once a month a group of out-of-control, loud-mouthed louts, who are led by Linnea’s foster son Kauko, show up and demand a chunk of her pension. Only this time, it’s even worse than normal: Linnea is coerced into signing an unfair will and testament.

This is the start of a fierce battle between the gang of young tearaways and a frail old lady. Just in case worst comes to worst, Linnea prepares a glass filled with a deadly poison. And eventually the iron-willed Linnea proves exactly what a sweet poison cook is really capable of.

The Sweet Poison Cook was adapted for film in France in 2014 (dir. Bernard Stora). It was also adapted for a TV series in Finland in 2002 (dir. Ere Kokkonen).

“I remember being fascinated by the storyline: An endearing widow… concocts a poison intended for herself and accidently ends up not only killing her own relatives, but also her own friends.” – Yle