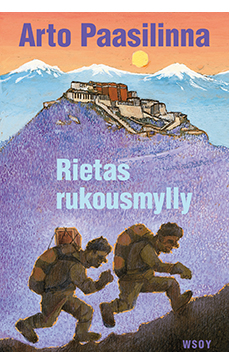 A rich tale of travel and trickery that pushes the boundaries of imagination and carries a strong political message.

A group of Finnish men, including a development manager and a product developer, travel across Lake Inari, the Tibetan mountains and India in an attempt to sell their newest hi-tech product: a prayer wheel made from an old-fashioned coffee grinder. A series of mishaps leads the group of friends to become the prophets of a brand new religion whereby the universe itself is their deity.

As the men spend time in the dark, their faith in the universe strengthens. Their prayer wheel is designed to take care of any religious affairs, and it appears to be working. On their journey, the men meet the fourteenth Dalai Lama; Hannele Pokka, the former governor of Lapland; and a Himalayan snowman.

“The Wanton Prayer Wheel is an easy read… Paasilinna’s humour shines through, and people need humour in this universe.” – Helsingin Sanomat newspaper