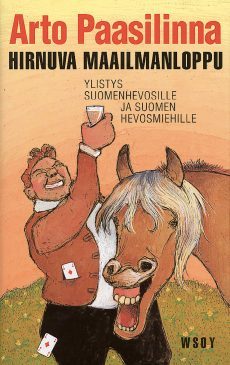 The World Ends in a Neigh

A wild and rib-tickling story that combines Orwellian dystopia with talking horses and social satire.

The Words Ends in a Neigh tells the story of Huru-Aaroni, a Finnish horse who has learned to speak. The story kicks off when Huru-Aaroni’s owner sells him to Ossi Huikkola, one of Finland’s most well-known horse breeders. Enter local vet Tarmo Saamakorpi, who is in charge of training foals and is partial to a spot of drinking and gambling every now and again. With Saamakorpi‘s special skill being put to good use, it’s not long before all the new foals learn how to speak!

In The World Ends in a Neigh Paasilinna explores life from the perspective of both horse and man with incredible depth.