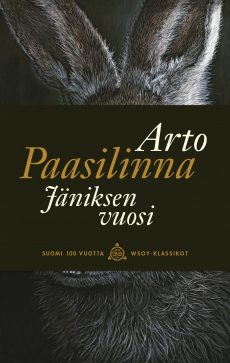 The Year of the Hare

An internationally bestselling comic novel in which a man—with the help of a hare—realises what’s important in life.

Journalist Vatanen is burnt out and sick of the city. One summer evening he accidently hits a young hare on a country road. He tends to the hare’s leg, befriends the creature, and gradually sheds his former life.

The incident becomes a life-changing experience for Vatanen, who decides to quit his job, leave his wife, and sell his possessions to travel Finland with his new-found friend. Their adventures lead them to forest fires, pagan sacrifices, and killer bears before they settle down in a cosy cabin in the wilds of Lapland.

The Year of the Hare is a wildly entertaining mix of fable, farce, mid-life crisis, and travel book. It’s a tale of freedom, commitment, and survival that has been charming readers around the world for decades.

With rights sold in over 30 territories, this award-winning book is widely considered Arto Paasilinna’s best work and a Finnish literary classic.

The Year of the Hare was adapted for film in France in 2006 (dir. Marc Rivière) and Finland in 1977 (dir. Risto Jarva). It has also been adapted for stage. The UNESCO Collection of Representative Works classified it as a masterpiece of world literature.

2015, Listed by the Independent as one of the 10 foreign books we should all read
1994, Premio Letterario Giuseppe Acerbi (Italy)
1993, Pro Finlandia (Finland)
1989, Prix Littéraire Air Inter (France)

“This incredible ecological fable, a journey through Finnish seasons and landscapes, is a genre of its own. Arto Paasilinna has invented a new genre: ecological humour.” – BiblioMonde

“Rarely do reviewers come upon a novel they believe to be a masterpiece, which they feel will become part of their imaginative lives. For me The Year of the Hare is such a work.” – The European

“There is an enchanted lightness to everything they do… This is such an inventive novel… that one does not want it to end.” – Ham and High

“No wonder the French have made this book into a cult. Finnish wit is as sharp as the Arctic weather.” — Mail on Sunday

“Exhilarating… Constantly heart-warming… For reading in the heart of winter, there couldn’t be a more enjoyable antidote… You’ll want to laugh out loud at all the good parts, and savor every lean, simple, honest sentence.” – Shelf Awareness

“Paasilinna has been amusing Finns for thirty years and readers in twenty-five languages.” –The New York Times

“An exemplary comic novel, full of amiable if binding warnings about the septic follies of civilization-to be read with rising anxiety and delight.” – Thomas McGuane

“Step out of the domestic gulag and into The Year of the Hare, a novel that depicts the confident freedom of the journeyman. I loved it.” – Matthew Crawford, author of Shop Class as Soulcraft

“I love The Year of the Hare… Which of us wouldn’t secretly want to live in a novel as fresh and as full of events as this one?” – Pico Iyer, from his foreword

“Escapism at its best… Just pure fun-a fantasy of what might happen if one day you just said, ‘Oh, the hell with it.’” – Lynn Neary, NPR

“Amazing… It can be read over a long winter afternoon and will leave you feeling a little warmer inside.” – San Francisco Book Review

“A wonderful book… The perfect escapist literature… It will have you laughing and gasping by turns… Of the many lines in this book that I cherished, the last is one of the most delicious: ‘Vatanen is a man to be reckoned with.’ So is this book.” – Lonely Planet

“Compelling… You might just find yourself wishing for a hare to enter your life in the near future.” – Seattle Post-Intelligencer

“A joy… The glory of the outdoors is celebrated here, through each season, and we can nearly smell the early clover and meadow vetchling of the hare’s diet… Vatanen is who we want to be [and] who we yearn to be brave enough to become, as soon as we stop waiting for the timing to be right.” – BookPage

“Paasilinna’s style is all Finn-a sly sense of humor, a simplicity, a moral compass that points firmly north and out of doors, away from cities… Readers root for Vatanen as he leaps off the mad merry-go-round.” – Los Angeles Times

“A fable of the joys of freedom… The hare proves to be a delightful, undemanding, and loyal companion, who can laugh, listen, and feel embarrassment.” – The Boston Globe

“Inventive, satirical, and quite humorous. It is also refreshingly sentimental in the sense that Paasilinna reaffirms our connection with the animal world and our inherent need for happiness and freedom to maintain quality of life.” – Booklist

“Hilarious … With its fiercely independent protagonist and its depiction of Finland’s wild northland, this comic novel will offer readers a rare opportunity to experience Finland and read one of that country’s most popular authors.” – Library Journal

“The Year of the Hare offers enjoyable yarns: fun adventures, agreeably related… It’s so good-natured and has so much varied action-and that animal-appeal-that it makes for a consistently enjoyable read.” – The Complete Review

“Although Finnish books do not generally interest French readers, because they are too earthy, too proletarian, too simplistic, Paasilinna’s Vatanen is a refreshingly absurd and satirical exception.” – Bernard Géniès, Le Nouvel Observateur

“The Year of the Hare is an entertaining mix of fable, farce, mid-life crisis and road book. It is a fable of freedom, commitment and survival. It is series of comic bungles and misadventures.” – The NZ Herald

“Althoug Finnish books do not generally interest French readers, because they are too earthy, too proletarian, too simplistic, Paasilinna’s Vatanen is a refreshingly absurd and satirical exception.” – Bernard Géniès, Le Nouvel Observateur

“Sums up the Finnish culture and people” – The Guardian