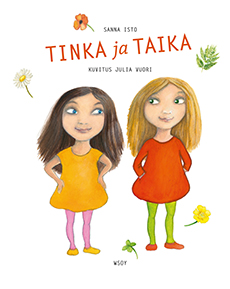 Winner of the 2011 Arvid Lydecken Prize!

When Tinka and Taika’s grandmother comes to visit, the house is suddenly flooded with secrets. At times Grandma’s trunk is heavy as a rock; at others, it’s as light as a feather. The plucky girls undertake to solve the mystery that’s vexing them: is Grandma a witch and does that make them witch’s grand-daughters?

2011, winner of the Arvid Lydecken Prize

“Julia Vuori’s illustrations give the book a fairytale lift. The perfect amount of mischief and merrymaking can be seen in Tinka’s and Taika’s eyes. At the best moments, Vuori also revels in the shifts in scale and flights of fancy characteristic of nonsense stories. The illustrations leave the reader with plenty of room for their own imagination.” — Helsingin Sanomat newspaper