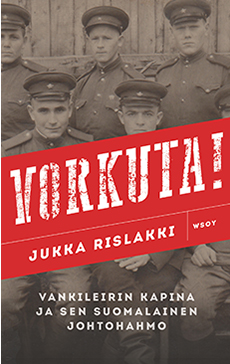 “If space in history books were alotted in proportion to human suffering, then Vorkuta would warrant one of the longest chapters.”  – Norman Davies

During Stalin’s rule millions of innocent people were sent to the Gulag Archipelago prison camps. From 1932 unti 1957, the mining town Vorkuta on the Pechora river, in Russia’s Arctic, stood at the centre of Europe’s most extensive complex of prison camps.

A group of young prisoners at Vorkuta did what the others would not dare; they took a stand against the Soviet authorities and managed to make a difference that impacted them all. Their actions gave start to the eradication of the Gulag system, and impacted greatly on the Soviet nation.

Jukka Rislakki reveals the true story of Vorkuta Uprising with his extensive and thorough research on the subject. He succeeds in reconstructing the sequence of events inside the Vorkuta camp by cross-referencing the historical documentation of the events with the information given by the survivors of the 1953 Uprising. The eye-witness accounts also lend an intimate voice to this historically poignant story.

“Brothers! No matter where we are from, of which nationality, today our fate shall be sealed. Soon we will know if we have any hope of a better future and if we can return home to our families.” (Speech by the Leader of the Uprising 22nd July 1953)

Jukka Rislakki was awarded a prize for Vorkuta! Gulag Uprising during the 22nd Publisher’s Forum in Lviv, Ukraina in September 2015.

“Vorkuta! is absolutely a fundamental work; no book on the post-Stalin revolts has appeared in Finnish which equals it in systematic and deep research. To us these revolts are examples of bravery, and they brought prompt relief to the mine slaves.” – Helsingin Sanomat national daily

“Excellent, well and fluently written, curiosity-provoking documentary about the notorious Vorkuta, and about the events on the camp around 1953, which have been kept in silence. Recommended to everyone interested in the history and events of the [prison] camps and in the domestic policy of the Soviet Union”. – Kirjavinkit

“Vorkuta! is the result of an utmost and a thorough research. Jukka Rislakki has even succeeded in interviewing people who have been freed from the camp, and eyewitnesses who were still alive some years ago. Other sources include a large camp literature and previous research, official documents from the archives, newspapers, letters and memoirs. (…) Jukka Rislakki analyzes interestingly his source material. I very much agree with him e.g. on the fact that a totalitarian state like the Soviet Union may leave in their official documents an unreliable and very one-sided mark. These “cleaned up” archives may lead researchers astray. The very fact that Rislakki also has had access to eyewitnesses, to their reports and to interviews, complements and increases the reliability of the research of the revolt on the Vorkuta camp.” – Pentti Stranius in Agricola (History research database, University of Turku, Finland)

The book by the well-known Finnish journalist Jukka Rislakki is devoted to the little-known historical event , the heroic Vorkuta uprising in 1953. Vorkuta uprising, together with Norilsk and Kenhirske, dealt a decisive blow to the whole system of the Gulag, and forced the Kremlin leaders retreat, shaking faith in the power of the whole Soviet system. The Author relies both on already published studies and on the results of his own archival work. The book not only expands our idea of ​​the extent of resistance to Stalin’s repressive machine, but stands as a memorial to the spirit, courage, pain and suffering of the Vorkuta insurgency. Vorkuta uprising is an example of how the greatness of the human spirit can break seemingly insurmountable camp walls beyond the limits of possible. For a wide range of readers. – Litopys