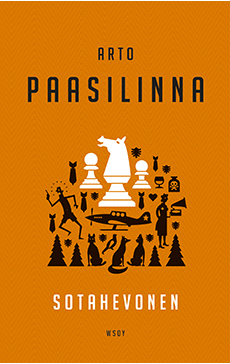 Two Russians—a pilot and a Soviet spy posing as a pharmacist—infiltrate Finnish society with sidesplitting results.

War Horse tells the story of two Russian men: a pilot, Lieutenant G. Savolenko, and a pharmacist, V. Kunitsin. Kunitsin, who speaks Finnish, is a Soviet spy whose mission is to infiltrate Finnish society.

It’s March 1942 and Savolenko has been told to drop Kunitsin off in Finland. But when low fuel means Savolenko is forced to land his plane behind enemy lines, he too becomes a member of the Russian Airborne Troops, working as a saboteur.

And so begins the journey of two men who survive winter in Kainuu and embark upon a series of wild adventures together. While Savolenko gets involved with a beautiful pharmacist from Kajaani, Kunitsin gets himself a horse called Heikki who soon becomes his best friend as well as his assistant.

Unafraid of war, the two men travel in pursuit of the skies and the east. War Horse is a humorous and fascinating story about two men living in exceptional circumstances.

“Following the adventures of Russians in Finland is interesting. This book isn’t really about being on the front lines. It’s well suited for a reader who, like me, doesn’t like crude and bloody stories. There are many different aspects and perceptions of war, one of which is presented in this book. I’m not typically a fan of war books, but Arto Paasilinna’s writing sunk right into the topic.” – Kirjavinkit blog