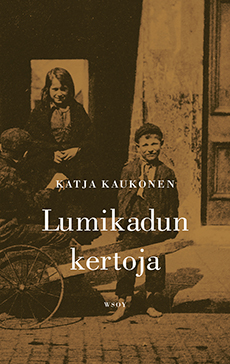 A powerfully expressive story of ordinary people in a small town during World War II, and of those who watch over us.

“As its name suggests, Gwiazda is star-like; it shoots out a bit in every direction. It is a perfect fit for you as a town, for the people there still believe in miracles.”

With these instructions, Bajek arrives in a small town in Poland, an idyllic place where the cherry trees still come into bloom and the smell of newly-baked bread wafts down the streets. It is 1937, and Europe is still unaware of what lies in store.

Bajek settles in as a janitor on Gwiazda’s Snow Street, and he gathers a lively community around him. There are Lilka and Marek, a pair of storm-tossed lovers who have been offered a home by Bruno, who spends his time working all over the country with travelling theatre troupes. There is Olga from the bakery, a hard-working woman who is still waiting for the return of her husband, who disappeared without trace. And there is Lilka’s boy Paweł, born reluctantly to breathe air heavy with the portents of war and confrontation.

Years pass, the Germans arrive, and they begin to shape the Poles as an occupied slave population. Bajek’s instructions are to keep his head down, to observe and to record, not to interfere in the course of events: that is how he has been briefed from above. But who could just stand idly by and look on when destruction threatens to engulf the entire street and all its inhabitants?

Watching Over Snow Street opens a quite new chapter in the already impressive work of Katja Kaukonen (b. 1968), the author of two previous novels and a collection of short stories. It takes the reader into the maelstrom of a world torn apart by war, but it shows the joy, hope, and humanity found in its midst. With her richly expressive and poetic idiom, Kaukonen exposes to the reader a bird’s eye view of a world where war seeks to shrink humans into ants to be crushed underfoot.

2018, winner of the City of Tampere Literary Prize

“It takes a lot to write a story about the cruelty of war that isn’t ruined by the distance and cynicism of the reader… Kaukonen’s novel is a commendable exception. Its beautiful narrative exudes hope and humanity.” – Keskisuomalainen newspaper

“Katja Kaukonen’s novel exudes humanity in the midst of a cruel world war… Although the physical appearance of the characters is not really described, their features emerge through their actions. They feel like genuine, forgotten destinies from the darkest corner of a mass grave of millions… Watching Over Snow Street gives the reader a window into a world where stories are more important than the truth, because without them we would lose our minds.” – Etelä-Suomen Sanomat newspaper

“Rather than dealing with of violence, Kaukonen’s novel is a story of life, which keeps going on in an occupied country regardless of everything else that is happening.” – Satakunnan kansa newspaper

“Katja Kaukonen’s novel is a magical, fairytale-like work that invokes a sense of deep tragedy – it is like human life itself, and the beauty that exudes from it. Watching Over Snow Street tells a story of a dark period, war-time Poland, and of ordinary, ‘small’ people, their communities, their lives and their destinies in a style that is beautiful and enchanting.” – City of Tampere Literary Prize Jury

“Kaukonen’s style is infallible. Not once does the narrator’s voice waver. The story carries all years covered by the work, each person is like a loved one, but the continuation of the story is unpredictable, as the magic realism does not reveal its snakes until… The author tells of the joys and sorrows, hopes and fears of people who were trampled by the second world war, tells of those who did not survive, those who jumped or were taken. But there is bright light throughout. Miracles that are not explained to death. Stardust.” – Leena Lumi blog

“A novel with a clean, bright and beautiful narrator. I could read it again anytime.” – Lukutoukan kulttuuriblogi blog

“The atmosphere of the work is like a sepia-toned fragmentary dream. There is something pan-European about the narrator of Watching Over Snow Street, something that would work fantastically in a movie.” – Lumiomena blog

“Katja Kaukonen’s book deals with a topic that has been covered a lot in literature. Her style, however, is original, filled with mysterious beauty.” – Annelin lukuvinkit blog