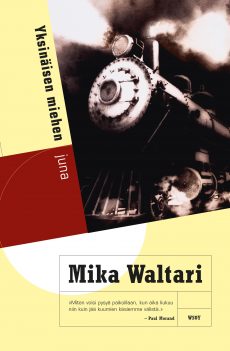 Documenting Mika Waltari’s trip from Helsinki to Istanbul and back in the summer of 1929, A Lonely Man’s Train tells the stories of Waltari’s real life visits to Rome, Berlin, Vienna, Budapest, Belgrade, Paris and Sofia. Waltari was fascinated by Istanbul—then Constantinople—and set off with the intention of experiencing new things.

“I’m off to seek adventure, romance, long-distance train journeys, new people, new cities. I want to dive into new countries and nations and live within their particularities.”

Along the way, Waltari experiences romance, crime, surprise, and even rejection. A Lonely Man’s Train is considered a modern classic that readers return to time and time again.

“There’s something addicitve about this book; even as I read it I wondered how I could make a similar trip, even though I am not a young recent graduate. The story is… timeless.” — Uusi kuu blog