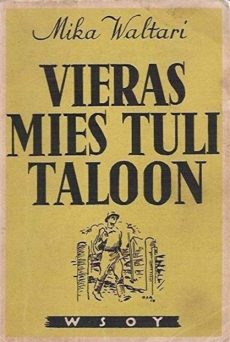 A Stranger Came to the Farm

A profoundly tragic tale about love, resentment and alcohol abuse

Aaltonen arrives at a remote Finnish farm seeking work. The so-called stranger comes from the city, where his former life was worlds apart from the humdrum of the Finnish hinterlands. The farm is managed by an unnamed, strait-laced woman who lives with Alfred, her alcoholic husband who she keeps locked up in the bathroom. Although the farm was originally purchased in an attempt to save Alfred from the evils of the city, his wife soon realises that the evil she wanted to save her husband from lies deep within his soul.

Waltari submitted A Stranger Came to the Farm to WSOY’s novella competition anonymously and won. When his book Never A Tomorrow was awarded second place and the jury learned that both works were by Waltari, he had to withdraw the latter.

A Stranger Came to the Farm has been adapted for film twice: first in 1938 by Wilho Ilmari and then in 1957 by Hannu Leminen.

“…a masterpiece, a unique journey into the hearts of men, which slowly builds an inescapable fate. One of the most significant novels I’ve read lately, classic in its simplicity.” – Saliot Thomas, World Literature Forum

“…effective, striking, in many ways. Yet in spite of the sparseness and compactness of the book [Waltari] manages to make it almost lush, or purple, in some of its passages.” – Saturday Review