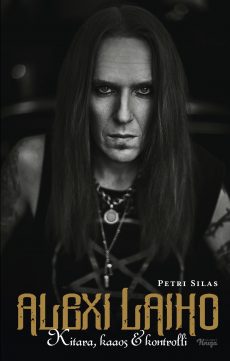 In his only official autobiography, death metal icon Alexi Laiho (1979-2020) reveals the truth about his extraordinary life, from his roller coaster lifestyle as a member of Children of Bodom, to becoming a living legend.

From the moment Alexi Laiho first heard “Money for Nothing” by Dire Straits, he was hooked on music. That’s why, when school failed to grab his attention, Alexi chose to immerse himself in piano, violin, and music theory, dreaming of becoming a rock star.

His life was filled with drama, from getting his first electric guitar to meeting his future wife Kim Goss in Helsinki, from founding Children of Bodom and touring Europe to treading a path of self-destruction, from his stint as a member of Impaled Nazarene to touring on both sides of the Atlantic. All the while Alexi was battling serious mental health issues.

In Alexi Laiho – Chaos, Control & Guitars, Alexi wrote candidly about his drunken antics and relationship with substance abuse as well as the tour bus accident that would cause him years of pain. In a voice that is warm, humble, and open, this is the Alexi we’ll all remember. It’s Alexi on the things he loved, the things he hated, and the things he feared. It’s a story that will stay with you for a long time.

“The autobiography sounds authentically like its subject, as the only voice we hear is that of Alexi Laiho himself, often serious but sometimes suitably jovial. Petri Silas takes on the role of chronicler, piecing together Laiho’s own words into a compelling and well-oiled story.” – Jarkko Jokelainen, Helsingin Sanomat newspaper