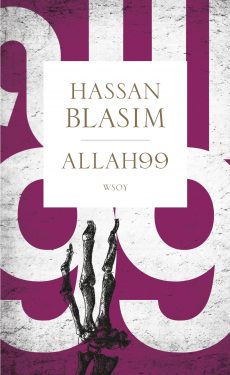 An exploration of the conditions of exile in a boundlessly foolish world in this powerful, highly anticipated debut novel from Hassan Blasim . One of The Guardian’s ‘Best Books of Autumn 2020’.

Hassan Owl has arrived in Finland. A writer and a refugee of the Iraqi civil war, he spends his days working as a vet whilst trying to get his work published in the Arab world.

In an attempt to escape the censorship that has plagued his career thus far, he starts a blog and sets himself the challenge of capturing Europe’s so-called ‘refugee crisis’. Over the next few years, Owl travels across Europe and interviews 99 individuals whose lives have been disrupted by war, persecution, and poverty: from chess-playing people-traffickers; suicidal photographers; absurdist sound sculptors to cat-loving rebel sympathisers and murderous storytellers. Along the way, Owl tells his own life story and meets Alia, an old woman who becomes his muse and inspiration.

In 2000 Blasim left Iraq, where he had been persecuted for his film-making and where his writing is still banned. He spent four years travelling across Europe, eventually settling in Finland. His highly anticipated debut novel Allah99 draws on his own experience, blending the fantastic with the everyday to explore themes of exile, humanity, art, and philosophy.

Publishers of The Iraqi Christ

“This novel about exile portrays an array of human fates, each touched by the madness of war. The different voices and tones blend together in this book that manages to alternate between grief, black humour, despair and a strong hunger for life in an unconventional, inventive way. Morén’s Swedish translation is wonderfully lively and nuanced, moving masterfully between different styles to covey a versatile and powerful image of a contemporary Arab reality.” – The Best Translation Award Jury (Swedish Writers’ Union), Sweden

“Blasim is perhaps the closest thing we have to an authentic Iraqi voice in contemporary fiction.” – The Guardian, U.K.

“Iraq’s Irvine Welsh… Blasim’s blunt rhetoric, macabre humour and blurring of reality and imagination can feel overwhelming, but the refugee experience is traumatic: language is bewildering, memories are clouded and truth is often distorted to save lives. Blasim perfectly captures that sense of alienation.” – The Observer, U.K.

“An inventive debut novel that expertly depicts the devastation of conflict and dislocation of exile.” – The National, U.K.

“A storehouse of revulsion and wonder.” – The Morning Star, U.K.

“Sprawling and breath-taking, stuffed with cultural and literary references, this is a dazzling work of imagination and ur-reality.” – The Irish Times, Ireland

“Confirmation that Arabic literature in translation can be irreverent, blunt and starkly, fearlessly modern.” –  Hadara, U.A.E.

“Rarely have I read literature whose concern is so acute, where fiction feels so vital… The great thing about Allah99 is that it is not only necessary fiction, but also comments on the necessity of fiction.” – Dagens Nyheter, Sweden

“In Allah99 burlesque meets the serene in the form of lofty reflections on literature and philosophy. The result is a knock-out combination of poetry and hilarious anecdotes that cheerfully shows the finger to conventional western literature.” – Expressen, Sweden

“Simply great literature. A crazy celebration of words unlike no other.” – Svenska Dagbladet, Sweden

“Allah99 represents the very best in literature… It is a fluid novel, a real page-turner. It explores one character’s sordid fate after another, but the narrative mosaic is so lively and rich that reading it is exhilarating. I cannot remember the last time I went on a ride quite like this.” – Helsingin Sanomat, Finland

“Blasim masterfully combines a fragmented, chaotic narrative with strong themes and messages. This book evokes fury within the reader; fury which explodes quite unexpectedly… The characters’ fates underline a two-fold sense of displacement: both in their home countries and in the Europe to which they have been forced to adapt. Blasim successfully deals with a particularly timely topic from many points of view, without falling into the trap of over-simplifying the issue at hand by instrumentalizing the tragic fates of migrants… The language Blasim uses in this novel is multidimensional and nuanced in its many intertextual references… Allah99 is a reckless and playful book which is so savage that it makes the reader want to close their eyes – and, at the end, enjoy a good, old laugh.” – Savon Sanomat, Finland

“One can only imagine how excited the publisher must have felt when Blasim handed them Allah99, just the right size at 328 pages. Would this become a perfect bestseller, a touching account of an artist fleeing the oppression of Saddam Hussein’s Iraq and establishing a new life, finding love and peace in Finland after enduring enormous hardship? No way in hell! Blasim’s novel is anything but a commercial book written to please the crowds. Allah99 is impudent, reckless, sad, appalling, honest, forbidding, tear-inducing, emetic, thought-provoking, slimy, bloody, and, in the end, it’s as clear and pure as Finnish Koskenkorva… it’s the most important book of this millennium. For the first time, it is a book that allows its readers to really feel—that’s right feel (smell, hear, and see)—what life is like in Iraq, a country ravaged by war.” – Aamulehti, Finland

“Although its stories often end in tragedy, Allah99 is a joyful read filled with fireworks of the imagination: it’s polyphonic, rich, filthy, and surprising all at once… Even when dealing with the most inconsolable of human fates, this book reminds the reader that ‘there is a comical dimension in all phenomena with no exception’… Writing is Blasim’s way of bringing some sense to a chaotic world. Or if not sense, at least some solace, or a sigh of relief.” – Suomen Kuvalehti, Finland

“The reality that Hassan Blasim has put into our hands is insolent, wild, distressing, horrendous, inhospitable, heart-breaking, emetic, and bloody… And that is exactly why this book is a masterpiece. It takes us on a journey of reflection and exposure, showing us how the 99 names of God have been materialising as daily horror for Iraqis, whether living in Iraq or seeking life elsewhere. The characters, interviewed by Hassan Owl… are not the inventions of a wild imagination but real-life refugees and people whose lives have been devastated by war. They become the subjects of an online art project, a blog (God 99) that blurs the boundaries between fiction and biography, reportage and the novel.” – Asymptote Journal

“Reading Hassan Blasim’s Allah99  can be dizzying at times. This is a novel that blends literary forms and prose styles, juxtaposing passages about the horrors of war with a running commentary on Italo Calvino’s fiction. The sum total of that makes for one of the most singular reading experiences I’ve had lately; Blasim has found a fascinating space in which to operate.” – Words Without Borders literary blog

“Blasim does not adhere to the narrative structures held dear in commercial and book club fiction. Instead, he deliberately sidesteps Western storytelling conventions to reveal the intolerable randomness of pain.” – Lithub literary blog

“In highlighting the refugee experience, in all of its bleakness and disconnection, Allah99 excels.” – Lunate Fiction literary blog

“Perhaps the greatest writer of Arabic fiction alive.” – The Guardian

“Bitter, furious and unforgettable… Blasim’s stories struck me as so different from anything else I had read, not only from that part of the world but from anywhere else.” – The Wall Street Journal

“Blasim pitches everyday horror into something almost gothic… his taste for the surreal can be Gogol-like.” – The Independent

“Certainly one of the most innovative authors to emerge on the literary scene in the last decade.” – RTE

“Blasim’s vivid prose reflects the way the fantastic and the ordinary collapse into a Kafkaesque jumble during urban conflict.” – The Financial Times