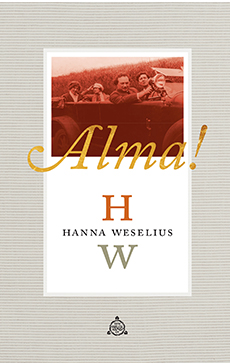 An award-winning, spellbinding novel about art and humanity.

Alma! is a rich, expressive novel about art and the world we live in, and the criteria by which we measure humanity – in particular a woman’s worth. Its reality has space for a lawyer secretly dating a young immigrant as well as an exotic dancer who lives her glamorous life in the pages of the tabloids.

It is Vienna, 1907, and Alma Mahler is sitting at a piano. Her fingers run across the keys, and she sings. But the grand piano’s note stand is empty. This song was never written. Not a single note of it was published. Not a single trained soprano ever sang it.

Elsewhere in the world, which is the same and yet of a totally different era, 234 Nigerian schoolgirls disappear. Armed men come to take them away in the middle of the night.

Aino reads the news in the paper and stops, sighs – is there anything she could do about the brutal reality of distant lands? She’s an artist, all she knows how to do is draw, and yet the images that flood into her mind gnaw at her. On her way to her studio, Aino thinks about a woman’s contours and gets lost watching a girl apply makeup in the metro, rust-coloured blush.

Hanna Weselius (b. 1972) collates her uniquely enchanting novel from fragments, the shards of mirrors in which we see reflections of many images of women. The stream-of-consciousness text immediately sweeps us up and along. Times, places, and perspectives change; who is speaking matters less than what is seen and how it feels. Putting the implements of beauty to work, Alma! bores critically into the reality surrounding us and into that bottomless, limitless other reality that each of us carry inside.

“Alma! is beautifully written, full of absolutely exquisite sentences and language that invariably creates new associations and paints pictures. It shows, in various different ways, what life is like today, what it is like to be a woman, what it is like to be a person and what kind of world we live in. Alma! has something completely unique that captured me and drew me in. I think it has to do with the writer’s exceptionally strong voice”.  – Author  Antti Tuomainen, head of the jury for The Torch-bearer Award

“The novel Alma! (WSOY) by Hanna Weselius (b. 1972), winner of the Helsingin Sanomat Best Debut of the Year Award valued at EUR 15 000, examines the position of women in society and the art world over the course of a hundred years. The novel shows that while there have been improvements, rage against women is still an enduring phenomenon. Especially on social media, hatred can easily gush boil over to reach terrifying dimensions, with abusers forgetting both their own humanity and that of their targets.At the same time, Alma! depicts the birth of a work of art in a light, organic manner: during the creative process, all situations of every life become a part of the work. Completely devoid of cynicism and irony, Alma! is an idealistic novel that paints things before us that should be self-evident and part of our behaviour at all times: when we talk about one person – like the one whose makeshift escape boat has just sunk into the Mediterranean – we are always talking about all people.”- Statement of the Jury, The Best Debut of the Year Award

” It is admirable how Alma! succeeds in being simultaneously wise, feisty and elegant. Weselius’ original voice is a valuable addition to Finnish literature.” – Antti Majander, Helsingin Sanomat newspaper

“What we have here is a delightfully distinctive literary debut. Hanna Weselius’ lyrical and multisensual prose leaves the reader with a thankful job: perusing and gluing in Polaroid pictures, each more breathtaking than the next. When the album is finally full, the spaces between the pictures form a dreamlike miniature world.” – Olavi Uusivirta, member of the jury for the Year of the Book competition

“Hanna Weselius’ work Alma! (WSOY 2016) is wedging its way into this year’s top literary caste. [–] I am delighted by the audacity of the narrative. The mood may seem to be one of low pressure, but the manner of presenting things keeps you vigilant and on the alert. The verbal images of situations and people are precise but porous, invoking strong mental pictures. [–] I enjoy the disparate hovering of the text, its tightness, frenzy and wandering, its glimpses of amorousness and irony.” – Tuijata literary blog

“The setup is fantastic, the narrative voice original and the whole point of view ingenious. [—] I read the book thirstily, devouring and fiercely swallowing it. The most salient thought I had was: I can’t get enough of this. That said, I can’t fully explain what Alma! is all about. [—] Weselius’ language is wild and refreshing – there’s something in it that I have never read before. At the level of the story, Alma! leaves me somewhat confused: What did I just read? What happened here? Did I miss something? I can’t decide if there’s too much of something or too little, but many loose ends were left untied, at least in my head. But even so, when I finished reading, I felt a bit tipsy: light, warm, enthusiastic and full of inspiration. Oh, Alma!, what have you done!” – Tekstien takana literary blog

“Splendid text, thought constructions that incite the imagination and skilful sentences I am thankful were written and thankful to read.” ­– Kulttuuri kukoistaa literary blog

“Weselius writes shockingly well. Her language is flexible, fascinatingly cryptic, approaching the reader from interesting angles. It is also strong and expressive in a European style.” – Reader, why did I marry him? Literary blog

“Weselius’ language is astonishing. It is expressive, inventive and exhilarating, and enchantingly uninhibited – like freely flowing water. The text gets under your skin [—] The novel is characterised by a frenzied feeling, and the writer shows pity for no one. [—] Alma! is an effective and impressive debut.” – P.S. Rakastan kirjoja literary blog

“The text is filled with beauty and strength, grit and visual imagery.” – Kirjan pauloissa literary blog

“I fell in love with Weselius’ narrative style, the way her text lives and splashes happily over the banks.” – Kirjoista ja muista kertomuksista literary blog