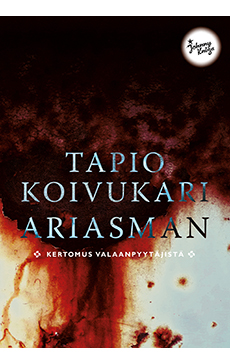 From a master of epic storytelling, a passionate seafaring saga pungent with pitch and peat

There’s something white on the horizon. What can it be? Fear leaps into the woman’s breast: is it an iceberg? She remembers when ice packed against the shoreline during her childhood, preventing the people living along the fjords from fishing and bringing hardship and hunger. The white dots are the sails of the Basques, but the unfamiliar make of their whaling ships drives the villagers to flee to the fells, fearing pirates.

Two summers later, the young, ambitious captain Martin de Villafranca arrives in Icelandic waters. Not everyone trusts the young commander, which leads to misunderstandings, unhappy incidents, power politics, smouldering anger, and xenophobia. The story of Ariasman, which is based on historical events, takes place in the Basque country and Iceland of the 17th century. The Basques’ whaling trips bridge the gap between these seemingly distant locales. Koivukari touchingly and vividly recounts a grand tale of whalers and coastal dwellers, their lives, encounters, and destines.

The story evokes the customs and beliefs of the era, as well as the harshness of everyday life. Above all, it is a tale of a voyage that begins well and ends poorly.

“Ariasman is a bold leap into the distant past, illustrating the adventurous life of the era in an interesting way.”  – Helsingin Sanomat

”For a male reader on the cusp of an early old age, Ariasman calls to mind his favourite writers of boyhood, Herman Melville and Jack London. What Koivukari has in common with the aforementioned is an astounding ability to draw the reader into the book’s events, in the case of Ariasman, into the frigid waters and rugged coasts of Iceland.” – Uusi Rauma

“The theme of Ariasman is topical in a globalized world, also in today’s Finland. The experienses of otherness and strangeness have always been a part of human nature. The seeds of conflict grow as if planted on the millimeter paper, in small actions and gestures, in silence, in nonspeaking and in mental isolation.” – Hannu Waarala, Keskisuomalainen

“The story of Ariasman is a whale-sized adventure, wild and tearing the heart out of your chest. The language of the novel is both finely tuned and strong – and the story is so gripping that it is difficult to put the book down. Old time whaling and the bravery of the boys of the sea are most fascinating! We predict even international attention to this novel.  – Statement of the Kodiksamia Prize Jury

“Koivukari’s story propels two mutually foreign worlds together with such force that the end result feels both inevitable and like a string of easily avoidable errors, as a proper tragedy should.” – Cult 24

“The enthusiasts of accurate historical realism will enjoy Ariasman the most, the zeitgeist is perfect and detailed. On the other hand the crises in cultural encounters are dealt with in a way that is timeless and timely at the same time.” – Kiiltomato

“It took a Finn to recount one of the most horrific incidents in the Icelandic history; the massacre of the island’s whalers. Tapio Koivukari’s sensitivity, joy of narration, and the pure ingenuity in his writing is as if he’d been an eye-witness to these events. Only the most accomplished authors achieve this.” – Gerður Kristný

“Ariasman is brilliant, the best historical novel that I have read in donkey’s years. Tapio Koivukari from Finland has written this truly Icelandic tale.” – Ragnheiður Sverrisdóttir, Morgunblaðið 26.5.2013

“Tapio Koivukari is a brilliant storyteller and the reader will feel sympathetic towards the representatives of both groups event though the deceiving magistrate has cannot really say much in order to apologize for his acts. The description of the epoch is fascinating, the narrator takes his time when describing navigating or whaling equipment,  buildings, weather or melting the blubber but without at the same time concentrating on the dramatic fates of the protagonists. The language is moderately archaic, which suits very well a story of 17th Century, and the translator Sigurdur Karlsson deserves our greatest admiration for his devoted translation which creates a linguistic universe well-suited for this story.” – Einar Falur Ingólfsson, Morgunblaðið

“Ariasman is (…) a historical novel, and it is obvious that it is based on thorough work with sources.  The author manages to perfectly use this template in creating a convincing frame for his story. As far as it is at all possible to imagine the community in which the families of the fishermen of the Western fjords were living four hundred years ago, I could see this particular world in my mind’s eye when reading the novel; even though Ariasman is a principally a Finnish novel, it is at the same time as Icelandic as possible. But, as the subtitle points out, it is not merely a story of the people of the fjords, but above all, a story about the Basque whalers who came to their shores with fatal consequences.” – Erla Elíasdóttir, Druslubækur og dodrantar Literary blog 2012