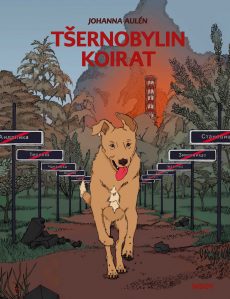 This chillingly poignant graphic novel offers a documentary style account of the Chernobyl nuclear power plant disaster in 1986 and its effects on the local people, animals, and nature.

The Chernobyl Nuclear Power Plant accident in April 1986 remains to this day the most disastrous nuclear power plant accident in the world. After two days the mass evacuation of the area began. Pripyat and other surrounding villages were abandoned, and no one was allowed to take their pets with them to safety. The dogs howled, trying to follow their owners, trying to get on the buses. The soldiers pushed and kicked them out. The dogs ran after the buses for ages. There was no mercy. Soviet squads were sent in to shoot the animals. But some survived and their descendants still populate the polluted area, the Exclusion Zone. Aulén tells the story of the disaster and its effects on the area in a documentary style graphic novel, embueing its readers with facts of the horrendous events from 36 years ago.

The original Finnish edition had been sent to the printers when Russia attacked Ukraine. During the war the Russian troops have jeopardized the safety of the Chernobyl Exclusion Zone, and have occupied the Zaporizhzhia Nuclear Power Plant, the largest nuclear power station in Europe. Aulén’s work shows the Soviet leaders’ mistakes and disregard for human life 36 years ago. Yet they seem most poignant today.

Donated English Language Rights: Non-profit organization Clean Futures Fund (CFF) works to provide long-term support for communities affected by industrial accidents. CFF has worked for several years in collaboration with Ukrainian government to assist people and animals affected by the Chernobyl disaster. For the Exclusion Zone strays, CFF provides sterilization, vaccinations and medical care, as well as food. Aulén has donated the limited-edition English rights to her graphic novel to CFF who directs all the proceeds from its sale to the CFF’s aid projects in Ukraine.  CFF’s special edition has just been made available on Kindle for US readers.