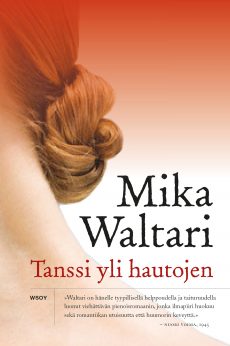 Dance Over the Tombstones

It’s 1809 and Napoleon’s Europe is facing extreme uncertainty. Finland, which was previously under Swedish rule, is annexed to Russia as a Grand Dutchy. This is affirmed at the 1809 Diet of Porvoo, where Dance Over the Tombstones is set.

Arriving in a lavish horse-drawn carriage, Emperor Alexander I arrives at the feast. He’s immediately taken by the governor’s daughter, the eighteen-year-old Ulrika Ottiliana Möllersvär. An intense and ultimately tragic love story ensues. Ulrika is an idealist: she dreams of her country’s freedom and prays that feudalism will soon be abolished. But will she be able to make peace with the emperor’s dark past?

Dance Over the Tombstones is a painful story about ill-fated relationships and desires that are impossible to insatiate. It is also a story of hope, passion and the pursuit of justice, set during perhaps the most important era of Finnish history.

Dance Over the Tombstones was turned into a film by Toivo Särkkä in 1955.