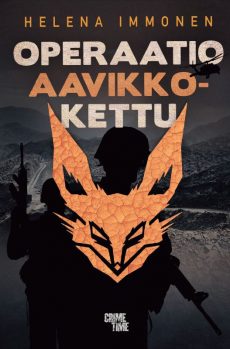 Novichok, a cyber attack and a clandestine operation in Afghanistan feature as Lt. Riina Koivu returns in this skillfully told and gripping standalone sequel to the acclaimed debut, Opera-tion Red Fox.

Following the short war between Russia and Finland, Reservist Lieutenant Riina Koivu is still recovering from her injuries when she receives a postcard from Lt.Col. Joakim Karhu which he had time to write before he died, seemingly assassinated by the no-torious novichok nerve agent. Riina and Joakim had met in the military hospital and shared a love of books.
Meanwhile, Joni Koivu, Riina’s brother, goes to Aghanistan with the Western forces and becomes mixed up in a CIA covert mis-sion in Afghanistan.
Back in Finland, the novichok case is assigned to Mikael Koivu, Riina’s husband, who works for the National Intelligence Service, and Mikael soon realises the gravity of the stakes involved in the investigation. Tensions mount as Riina, too, attempts to piece together the clues left for her by Karhu, but it soon transpires that she’s not the only one on the lookout, as Russian intelli-gence agents close in and a dangerous race to uncover the truth commences.
This suspenseful and relevant thriller, with its believable story-line and grounded characters, looks at the people and their mo-tives involved in highly plausible scenarios that will appeal to a broad audience.

‘A must-read for any fan of thrillers or military fiction, but not excluding any ot-her fans of good literature.’ 4.5/5 stars — Kirsi’s Book Club